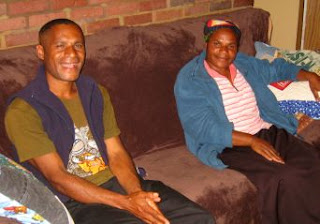 I was looking forward to a quiet and relaxing weekend before starting a busy new chapter of my life on Tuesday. You see, on Tuesday I start as a mentor in the STEP course, a 5-week training course that trains nationals to teach others how to read and write their local language. A man and woman from the language group that I am working with in the are coming to the course, and I am going to be their “mentor”, which basically just means that I go through the course with them and help them understand the concepts and do their assignments. They were supposed to arrive on Monday or Tuesday, but PNG being unpredictable as always, they showed up on Saturday afternoon. The 7-hour drive from their villages to Ukarumpa is along a highway that is prone to rock slides, bandits and other kinds of detours. They were so eager not to be late for the course that they decided to leave a few days early, just in case.

While their enthusiasm is commendable, it posed a small problem for us, because their accommodation would not be ready until Monday, and they didn’t have a way of getting food for the next few days either. The person in charge of arranging housing was not available to talk to until later in the evening. So Brian and I offered to have them stay with us on Saturday night, as we had a few empty beds in the house we are renting. We were happy to have the opportunity to get to know Jacobeth and Matthew Peter, because I will be working quite closely with them over the next two years, as they go through more STEP training sessions. But I was left scrambling for something to feed them, as our cupboards were pretty bare. And as we’ve mentioned before, you can’t just run to the store on the weekends! We ended up expanding their palate in many ways, as they had never before eaten pizza, banana bread, or pancakes, which is what we ended up feeding them over the course of their stay with us.

To round out the evening, we sat down with them and watched The Princess Bride on our laptop computer (they had started watching the movie at someone else’s house that afternoon). If you want to have the very unsettling experience of analyzing American culture through another set of eyes, watching a typically American movie with someone from another culture is a very good way to do it. I realized very quickly that much of the humor in the movie was missed by our guests, and I kept finding myself wondering what they were thinking at different parts of the movie. What impression of was I giving them? Obviously, The Princess Bride was far from the worst movie we could have picked, and we also know from our time in the village that when people do get to watch an American movie, their tastes tend to run towards the violent. Chuck Norris and Rambo have large fan bases in . On the other hand, The Sound of Music was our village was papa’s favorite movie.

In the morning, we all walked down to the Pidgin worship service. Without really thinking about it, Brian and I headed to our usual spot, right in the middle of the large meeting hall. I realized, a little too late, that although in the cities it is common for families to sit together, in many village churches men and women sit on opposite sides of the aisle from each other. We stayed where we were, but I think Matthew would have been more comfortable sitting in the rear of the church with a group of Papua New Guinean men.

After church, Matthew settled down in our living room and soon became engrossed in a National Geographic magazine that Brian’s grandparents had sent us a few months ago. He can read English, but ended up asking us for clarification of a few terms that he hadn’t encountered before or which he had heard before, but didn’t know what they were. So we found ourselves explaining in Tok Pisin DNA, genetics and conservation, among other things.

Now please do not misunderstand if I have inadvertently portrayed our guests as unsophisticated rural folks. Both Matthew and Jacobeth are very intelligent, well-spoken people who are obviously respected in their community because they have been chosen to represent their villages by coming to this course. It’s just a fact that they have been able to experience a few new things this weekend, and it has been a pleasure for us to be there to witness/cause it! Well, I’ve got to go and whip up some fried rice; they will be here in a half hour for dinner, before going back to the dormitories, where we finally found them rooms.

Wow, you guys handled the whole weekend very well. I'm impressed Matthew picked up National Geographic - I struggle to understand that at times. And then to have to explain across language and cultural barriers DNA, genetics and the like can be quite tricky. Bravo!

Glad to see you are still flexible! God knew you needed the extra room at times, Happy you had the beds to share. Also, nice pillows on the couch, I recognize them! You should show them the 4 wheeler mags also,
love, mom