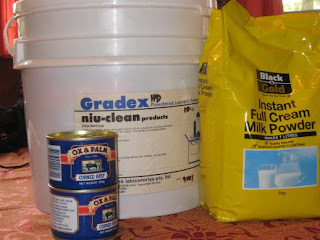 I decided I’d better write one last post before we go to the village tomorrow. I have to do it now, because in a little while Brian will be going down to the generator shed and will turn off the power for half the center. Our house will still have electricity, but the computer room won’t, which means no internet! You see, last night just as we were finishing dinner we got about 6 calls from people whose electricity had gone out. Brian and Clark discovered that one of the main electrical wires had burnt through, leaving about every third house on the lower part of the hill without power. It wasn’t something they could fix last night in the dark, and in fact it won’t be fixed properly until they can get parts from Lae, but they are going to try this afternoon to patch it together so that those families who were affected can have their electricity back. Of course this had to happen right before we are getting ready to leave for two weeks!

Tomorrow morning (Monday) we will load up the back of our truck bright and early, pick up Gil (who will be traveling out with us) and then drive to Imbo-Ungu land, in the . We’ll be staying in a house that a former missionary family built in the village, which hasn’t been regularly occupied since the late ‘90s. While there, Susan will be helping the translation team check some of their rough drafts and also check in on the literacy students she is mentoring. The village has high hopes that Brian will be able to patch together the leaky rain water tank that the village uses for drinking water. Brian is a little worried about living up to their expectations, because it seems like the water tank really is on its last legs. So maybe you can pray for that!

The nice thing about being able to drive to the village (hey – it’s a 7-hour drive over bumpy roads, I have to try to find something to look forward to!) is that you don’t have to worry about the weight of your cargo. When translators have to fly to their villages, they have to count every kilo of food and clothing. Our friend Joy flew out to a different language group in the last week, and she had to dehydrate all of her veggies and meat. But we are driving, so we get the luxury of canned food. Ah, village food! As you can see, we’re going to enjoy such delicacies as Ox and Palm tinned corned beef, powdered milk, and laundry detergent. Ok, the laundry detergent bucket is actually full of flour, rice and sugar. Plastic buckets are prized possessions in the village because they keep bugs and rodents out!

Well, I’d better finish packing. Check back in June for some stories and pictures from our time in the village!

Hi - Welcome back! Hope you have a good rest from the village, and looking forward to hearing how everything went!

Is the ox and palm better than american spam? Sounds great compared to dehydrated food.