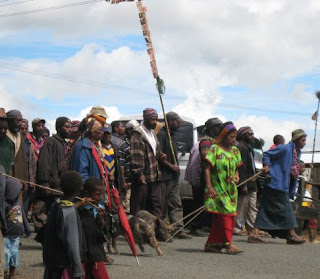 Compensation is a word that you hear often in PNG. If you wrong someone, or use something that belongs to them, they will likely demand compensation in the form of money or material goods. If you don’t pay, you may run the risk of starting a fight. This becomes a big issue for the PNG government. Since every bit of land in PNG has a traditional landowner, it becomes very difficult for the government to build, roads, dams, etc, because you could very well end up facing demands for compensation not only from the current landowner, but their descendants as well. Land disputes are very common, and cause all sorts of hevis, or problems.

Imagine that you own a pig. Your pig breaks out of its fence and destroys your neighbor’s garden. Your neighbor demands compensation – either in the form of money, or perhaps he demands that you give him the offending pig. This is a typical compensation case. But it can get much more serious. Suppose you are driving along the road, and you accidentally hit and kill a dog or a pig – what do you do? First things first – you definitely do not stop! You don’t know how the owner of the animal will react, so you keep on driving and report the incident at the nearest police station, or when you reach home. Compensation can then be arranged. This is a difficult concept for us to adapt to, because in , a “hit-and-run” is a crime!

While we were in Kundipoi we were able to witness a compensation settlement first hand. Young men from two Imbo-Ungu clans had gotten into a fight over local politics and one young man ended up with a badly broken leg. The clan of the injured man demanded compensation from the other clan. (You notice how quickly it becomes a dispute between clans and not individuals). They demanded an exorbitant amount – about 50 pigs and several thousand kina. The clan responsible for the injury arranged to make compensation on a Saturday, in the market, where everyone could see. A large crowd gathered at least two hours before either of the parties arrived. The group giving compensation paraded down the street, leading the pigs that they were offering, and carrying a T-shaped pole with 50kina bills stapled to it (shown above). They tied up all 14 pigs in a row, largest to smallest, and planted the pole displaying the 5,000 kina that they were offering for all to see.

The offended clan refused to accept the offered compensation. They didn’t even show up. They sent one person to inform the other group that they weren’t pleased with the offered compensation. They demanded much more. Brian and I spent about 4 hours in the hot sun, just sitting and watching the crowd as not much happened. We had originally picked what we thought was a good spot to watch from, but our friends kept suggesting that we move. When we didn’t agree, they finally explained that the spot we had chosen put us between the two disputing clans. They again strongly suggested that we move to the other side of the crowd, so that we would have a quick escape route “just in case” any fighting broke out. After four hours, we finally decided to go home. It didn’t look like the two sides would come to an agreement anytime soon. I’m glad we didn’t wait around, because we were told later that they didn’t come to an agreement until sunset!

We thought that 14 pigs and 5,000 kina was an awful lot to pay for a broken leg. We asked what the demand would have been if the man had been killed. They replied “a few hundred pigs” very matter of factly. Our friend Mathew is from the clan that was making compensation. He contributed one of the smaller pigs towards the settlement. He wasn’t very happy about it, because he thought it was just wasted money. However, he explained that he couldn’t refuse to help out his kinsman. If he didn’t contribute a pig in this compensation case, then who would come to help him out when he needed help?