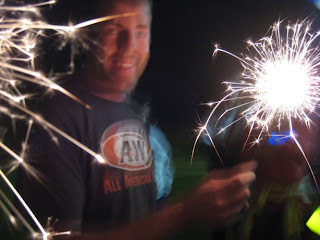 They say that it’s during holidays that you feel most homesick when you are as far away from home as we are. On Thanksgiving, we had just come back from 5 weeks of living in the village, and we were just thankful for running water, hot showers, and beds that were raised off the floor. At Christmas we were just settling into life in Ukarumpa, and it never really felt like Christmas. We hadn’t brought any decorations with us, and the packages that our families sent didn’t arrive until New Years Eve, and so all we had was a “Christmas Lamp” with a few small presents wrapped in newspaper: 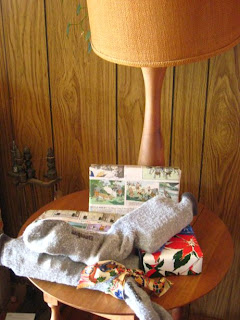 But the 4th of July actually turned out pretty nice. We had just celebrated Canada Day on the 1st, so we were already thinking about patriotic things. The weather was warm and sunny – just like a nice July day back home (unlike at Christmas, when the weather was nice and sunny – very unlike a December day back home!). We went to a big barbecue with some American friends (and some British, Australian, Canadian, Dutch and Swiss too), played Frisbee and croquet. We barbecued and ate tons of food. And we even had fireworks! (sort of). Someone had managed to buy sparklers, and we also discovered the wonderful things that can be done when you attach steel wool to an unfolded coat hanger and set it on fire: 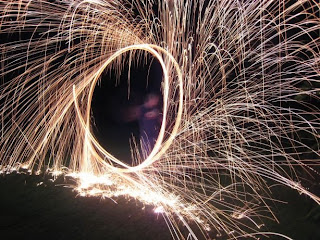 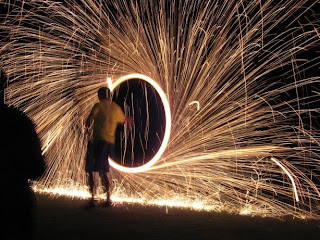