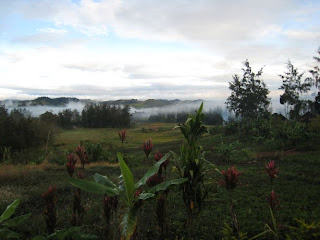 As we mentioned before, we spent last weekend in a nearby village. Above is a photo of the view from the village. This was our first time staying in a Highlands-style house, which are pretty different from coastal houses. Coastal houses are built to stay cool. They are up on stilts and have lots of windows. houses, on the other hand, are made with warmth in mind. They are built on the ground, and rarely have windows. They will often have a fire pit in the middle, and the smoke just wafts out through the grass-thatched roof. You can see in the photo below that the roof is blackened from the smoke. The house that we stayed in was similar to this one, except that it was rectangular instead of round. 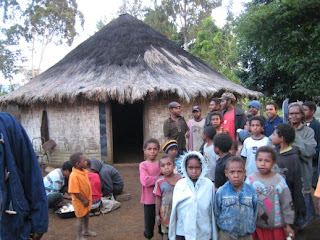 Inside, the house is just one room. It has a dirt floor, and around three sides it has a wide low platform for sitting and also for sleeping. The house that we slept in was about 30ft by 15ft. We shared it for the night with about 7 Papua New Guineans. We were glad that we had a fire for warmth, but we went to sleep with smoke stinging our eyes.

One of the adventurous things about staying a village is that you never know what to expect when it comes to the liklik haus, or bathroom. In this particular village, this was all there was: 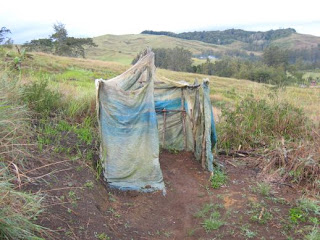 It was out past the houses, which was nice, since as you can see there wasn’t much cover provided! And this was probably the most challenging liklik haus I have encountered so far. Usually the hole is a little bigger! 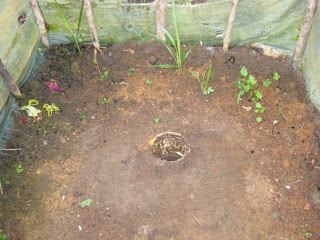