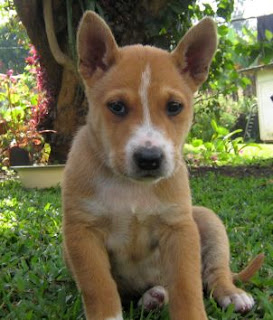 Meet Ruby, future ferocious guard dog. Right now she’s missing her littermates and isn’t acting so tough. In fact, she’s whining quite a bit and acting pretty pitiful. But we know that will pass with time. It’s her first day as an only dog. Pretty soon she’ll realize how lucky she is to have a spacious back yard all to herself. There is even a pesky cat to chase (one we’ve been trying to get rid of for over a month now).

And here is the doghouse that Brian and I built together over the course of a few weekends. It all started with a “simple” plan that I found on the internet. I convinced Brian that it would be a fun weekend project. About two hours into the project it almost turned into an frustrating ordeal (we didn’t realize that the spare 2”x2”s we were planning on using were actually kwila, better known as ironwood. It was a bit harder to put together than we intended!). But we persevered and ended up with a very nice finished project. And we were still friends when it was done too, which is the most important thing. 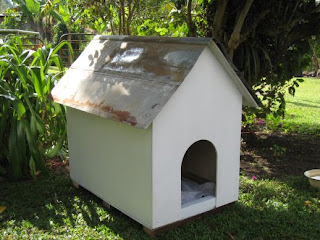 So how did Ruby get her name? She is adorable!