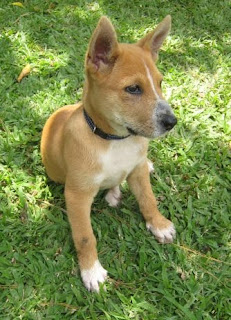 Defa (the lady who we pay to work in our yard once a week) likes Ruby, though she has trouble saying her name. In her language there isn’t a distinction between “r” and “l”, so most of the time the dog’s name comes out “Luby” or even “Buby.”

On Wednesday Defa made a comment that showed her opinion of how we treat Ruby. She told us “yupela i gat wanpela pikinini tasol” (you guys just have one child). In her opinion, our dog is hopelessly spoiled.

Papua New Guineans often have dogs, which are valued for security or for hunting, but they don’t take care of them the same way we Westerners do. Village dogs are often treated roughly and are left to find their own food most of the time. And so the fact that Ruby has her own haus kapa (house with a tin roof), and a painted one no less, shows that she is given special treatment. In Defa’s eyes, it’s a little crazy that we provide her with plenty of store-bought dog food, toys, etc. Every time Defa comes over to work, she comments on how fat Ruby is and how quickly she is growing. Lucky dog! 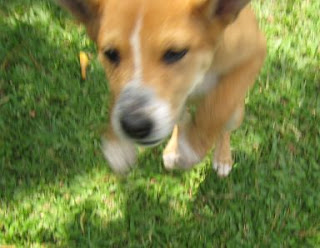