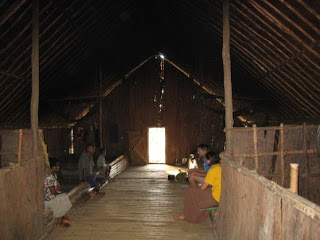 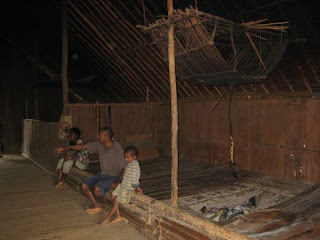 We ate a meal with one of the families in Walagu, and afterwards they showed us a house that they had built in the traditional Onobasulu style. Today each family has its own house, and the houses are built in styles borrowed from other groups in PNG. Traditionally, however, the Onobasulu used to build one long house that would sleep the entire village. The example they showed us was built on a much smaller scale than the actual houses that were used, but it was built following the traditional pattern. Men would sleep at one end of the house, and all of the women and children would sleep at the other end, in sections that were walled off. Fire pits like the one you can see in the photo were built at regular intervals for warmth and for cooking. The hanging “baskets” over the fire pits were used for drying food.

The Onobasulu were traditionally a lot more nomadic than they are now. A long house would last around 5-8 years, and when it began to fall apart, the community would build a new house in a different part of the jungle and move.