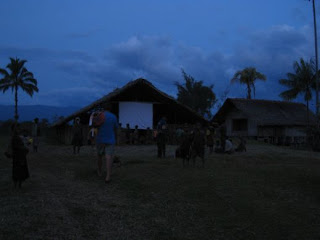 December 1 was world AIDS day, and we celebrated in style in the village. We had brought a video projector and generator with us. On two separate nights we showed the JESUS film to decent-sized crowds, but the big crowd came on Tuesday night when we showed two HIV/AIDS videos, both of which were produced in Papua New Guinea.

Rong blo’ mi yet tells the story of a young girl who goes to the city to attend high school. She is jealous of other girls whose boyfriends give them money and buy them nice things, so she starts an affair with a married man. Two years later she discovers that she has AIDS. When she goes back to her village, her father is ashamed of her and afraid of the stigma that AIDS will bring on the family, and leaves her in the jungle to fend for herself. Eventually the father is convicted about the way he has treated her and goes to find her and bring her home, but it is too late, and the girl dies.

Kisim AIDS, Kisim Taim is a short video that SIL produced. It tells the story of a woman who finds out that she is HIV positive after she brings her sick baby to the clinic and the baby is diagnosed with AIDS. She got HIV from her ex-husband. Her current husband is a Christian, and is not HIV positive himself. Her husband decides to take care of his sick wife and child, and together they speak out in the community about the dangers of HIV.

AIDS is a growing problem in Papua New Guinea. It is said that if things don’t change, in a few decades it will be as bad in PNG as it is in Southern Africa today.