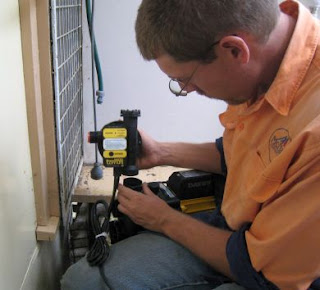 Today is a very happy day for me. I had to tell my husband “You were right” – but I didn’t mind.

When we bought our house 7 months ago, two things immediately went to the top of the needs-to-be-fixed list. The first was a new washing machine, and the second was a water pump and some plumbing reconfiguration. We bought a washing machine the month after we moved in, and have had nothing but problems with it. You see, our plumbing system was entirely gravity fed. Mostly that wasn’t a problem, except in two (important) areas. During the dry season, when the rain water tank would get less than half-full, we were no longer able to get drinking water out of the kitchen tap upstairs. We would have to go down to the basement in order to get water for cooking or drinking.

The second problem was with our washing machine. Because our water pressure was so low, our new washing machine (which had all sorts of electronics, because that’s how they make them these days) was never able to go through a complete wash without stopping and beeping about an “error”. This meant that I could never start a load of laundry and then leave the house, because I would need to be there to reset the machine so that it could finish the cycle. It also meant that it took two hours to wash a load of laundry. And so, unless I started the washing machine by 6am, I wouldn’t have time to finish the load and hang the clothes out on the line before I needed to get to work. I was convinced that we had bought a lemon and there was something wrong with the machine, but Brian always insisted that it was a water pressure problem.

It wasn’t until this month that we were able to afford to buy a new water pump, but thanks to a gift from one of our supporting churches, it was finally possible. Brian spent the day yesterday plumbing it in, as well as putting in a whole new set of valves and switches that will allow us to run our entire house on rain water during the rainy season. 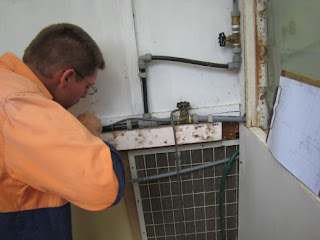 Ruby spent the day “helping” Brian (which means that she tried to sneak off with pieces of pipe or fittings to chew on if he didn’t pay attention.) 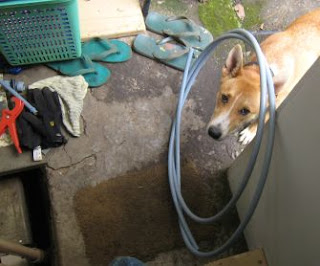 And this morning was the big trial – the first load of laundry with the new plumbing. I’m pleased to say that it washed a load in just 45 minutes this morning, and it didn’t stop once! As my mom says, it’s easy to admit your husband is right when he’s making things easier for you.

Yeah Brian!! Glad you got it fixed.