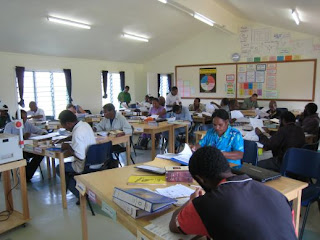 The STEP students are back for their fourth installment of literacy training. This time, however, we have moved to the new training center facility here at Ukarumpa. Although we were emotionally attached to the old, drafty roundhouse where we used to hold classes, the fact that a large tree fell on the building last month and pretty well squashed it helped the staff to make the decision to move to the brand new classrooms down the road. Ukarumpa’s training center is still a work in progress. Although we have nice new classrooms and dorm facilities, we’re still using the old dining hall and the old computer classroom. 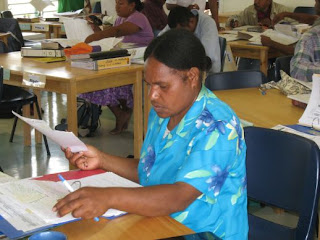 Mathew and Jecobeth are back and hard at work developing a preschool curriculum in the Imbo-Ungu language. The usually travel the whole day on a highway bus to get here, but this time, they got to fly part of the way since there were 7 landslides blocking the road (don’t you just love rainy season?). They caught an MAF flight from Mount Hagen to Goroka, and then were able to travel the rest of the way by bus. I asked them what they thought of their flying experience. It was Mathew’s first time flying, and he enjoyed it, though he said that being in a small plane made him a little nervous. Jecobeth had actually flown once before on a commercial flight, but she found the small 6-passenger airplane quite a terrifying experience. She told me that she just hugged herself and closed her eyes for the whole 30-minute flight, and was too nervous to look out the window. 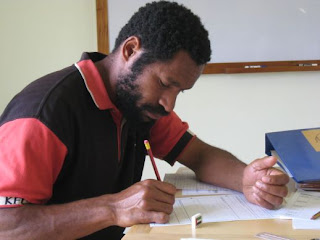