The High School here has a very active sports program – soccer, basketball, volleyball, track, rugby (sorry, no American football!), but their seasons tend to be a bit shorter. For example, the volleyball season is only 5 weeks long! Why? Well… there just aren’t that many other High Schools nearby to play against! Usually each sport will have a few tournaments to go to, where 3 or 4 schools will show up on a Saturday and play. The students play against both national High Schools and another mission school in Goroka.

Yesterday, some other ladies and I were sensibly getting our exercise indoors at the aerobics class, which meets three times a week in a classroom overlooking the sports field. While we were there, there was a torrential downpour. At first I felt a bit sorry for the track team and the touch rugby team, who were out in the mess practicing. But it looks like they were having fun… 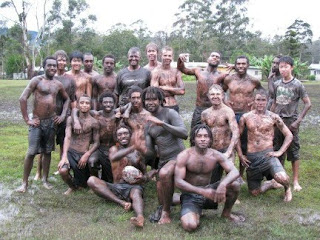 The girls volleyball team was also out in the rain – playing a match against the ladies of the community. 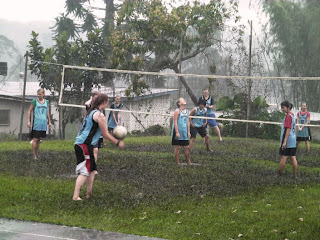 Recent estimates say that we’ve had almost 70 inches of rain this year already. The 30-year average rainfall for a year here in the valley is 85 inches. It has been a wet year so far, but dry season should be coming soon – right??

I am somewhat surprised to not see Brian right in the mix all muddied with a big smile on.