lsThis will be my last post about our hike to Saut, since it has been a couple weeks now since I have returned and I don’t want to drag the story out any longer.

Once our time in Saut was finished we began our hike over to Lemong. This was only about an hour hike, so we left late morning and headed back down the mountain to cross another river. This river had a bridge like the first big river we crossed on the way to Saut, but it was in disrepair and our guides were afraid it would break on us. After seeing the bridge we were glad that we were not going to cross it since it was right over VW Bug size boulders and there was quick moving water. We instead hiked up along the edge of the hill and found a place where we could wade/jump from rock to rock to cross the river. It looked much more intimidating than it was. Then after another swim we hiked up to Lemong. 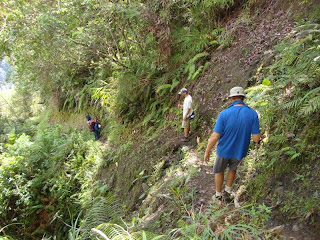 They told us this was the big road! 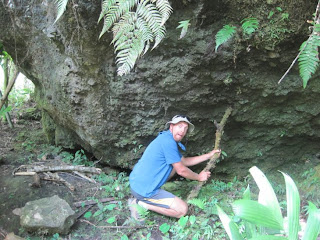 We were all doing our part to keep safe on the hikes. 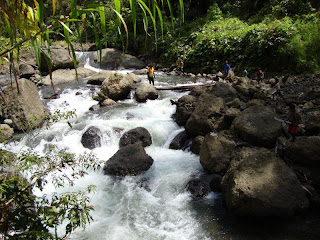 The view of the river from where the old bridge is. 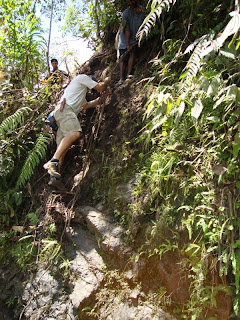 This is how we now had to get down to the river. 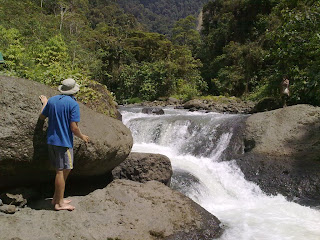 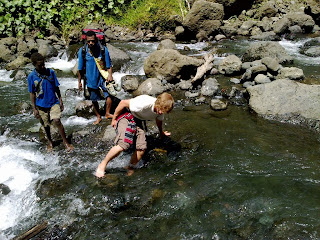 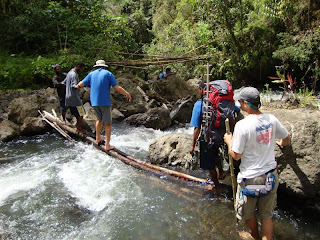 Always glad for a helping hand (you can see the old bridge up there in the background). 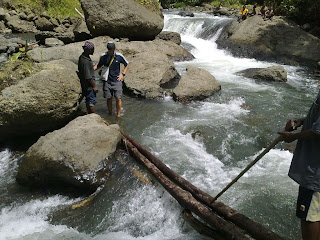 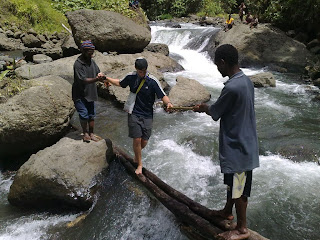 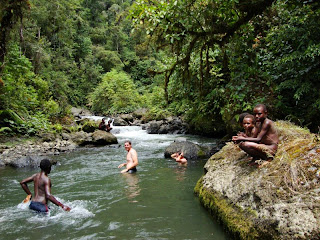 After we all made it safely across it was time for a little refreshing swim.

Lemong was a nice little village and the most “bush true” place that we stayed on our trek. We stayed in one of the big man’s houses which was just hard floors and lots of smoke. All we were doing in Lemong was to have Ryan meet again with the leaders and discuss the same things he talked about in the first two villages. This village is where the rain that Ryan talked about finally caught up with us. The clouds rolled in and enveloped the place we had rain most of the night. In the morning we ate a little breakfast of taro and greens and a couple of Snax crackers and headed back down the trail. We thought that we would be coming back to Kesengen to spend our last night, but our day changed drastically as we hiked. Now I must say that this final day of hiking was probably the easiest and some of the most beautiful. The only thing that I could compare it to back home is the hike around in . We crossed several little streams and the hike was pretty level going. We were able to look across the canyon at where we had been the days before in Saut and the ridges we had hiked on. Along the trail to Kesengen we met up with some people and they told us a story about how the PMV we were supposed to be riding home had gotten stuck in a river crossing the night before because the rain had swelled the river. They had no idea if the PMV would be making it up that day for our planned trip back to Lae. 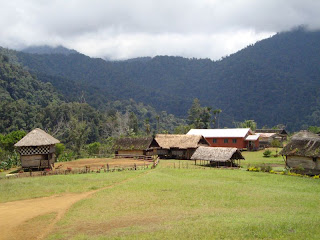 The village of Lemong (notice the nice church building in the background). 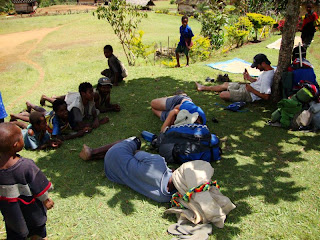 After our little hike it was good to take a nap, plus all the people were gone to their gardens so there wasn't much else to do. 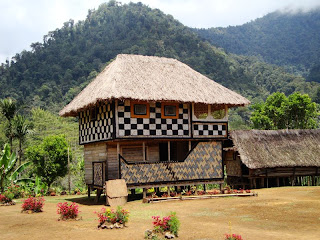 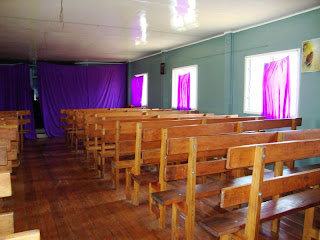 This is inside the church. I believe it is the nicest village church I have been to in PNG. All the materials had to be hiked in on the same trails that we had been hiking. The floors are even varnished like our home in Ukarumpa. 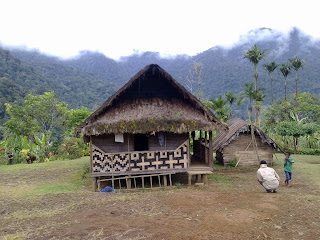 This was the house that we stayed in. 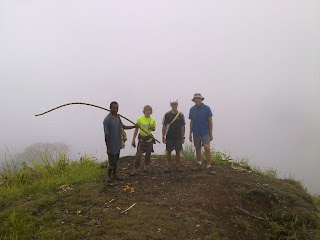 Leaving Lemong we had to hike through the clouds. That long pole that Bape is carrying is sugarcane which is a favorite snack of most Papua New Guineans. 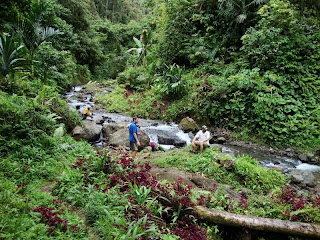 Taking another rest by a stream and refilling our water bottles. 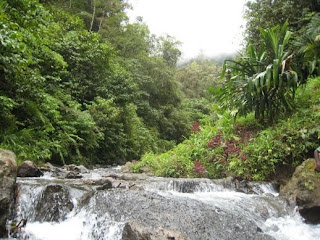 This is were being flexible comes into play. We hiked the rest of the way back into Kesengen and wondered what we were going to do. At this point we had two options. One was to stay in Kesengen and hope that the PMV was able to make it up the mountain (but we had no idea of what condition the truck was even in since it was stuck in the river) or to hike three hours down the mountain to Tinibi and hope to find a place to stay and catch a ride from there. After some debate amongst the four of us we decided to go ahead and head down the mountain to Tinibi. This time though we were carrying our own packs, but at least it was all down hill. Well it was mostly down hill. You remember that we were going up and down mountains the whole way up to Kesengen on the PMV so it took us longer than we thought. We hiked and hiked and talked about all the wonderful things that would be awaiting us in Lae once we get there. I think that was what kept some of us going. Oh and I forgot to tell you that we had already hiked two hours from Lemong to Kesengen before we started our hike down to Tinibi. We finally came to the water crossing where the PMV got stuck and we could see why. We crossed on some logs and continued on and just before reaching Tinibi we passed the aforementioned PMV, no longer stuck in the river, on it’s way up to Kesengen. That means we could have waited in Kesengen, but we were committed now. 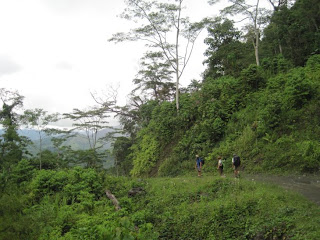 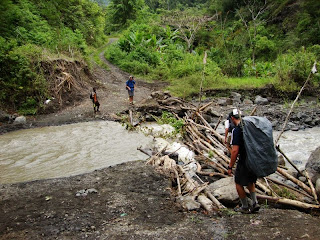 Here is the spot in the road where the PMV got stuck. We all had to cross this little log dam. 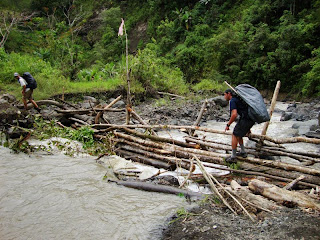 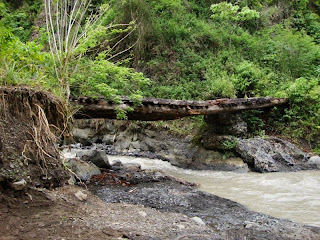 This is the bridge that used to be used to cross the river, but as you can see it is not so great anymore. You wonder what the last guy to drive across it thought when the logs started cracking?

Once reaching Tinibi we were told to find the old MP (member of the PNG parliament) who lived there and was originally from Saut. We were told he would help us with a place to stay and he also had a truck. We met him and Ryan greeted him in tok ples and instantly he brightened up. We talked him into giving us a ride to the next hill where we might get cell reception to try and call for a pickup from Lae. We had convinced ourselves (well everyone but Ryan) that if we pushed hard enough we could get all the way to Lae in one day. Caleb is our head security guy here in Ukarumpa and his job has him working closely with our hired security company Guard Dog. Guard Dog provides many different services to it’s customers and one of them being help if you get stranded somewhere along the highway. So Caleb calls and tells the guys that we are stuck on this bush road trying to get to the highway and that if they can send a vehicle for us we will keep going and meet them half way. So we hop back on the truck of the MP and keep heading down the mountain. Finally we come to a main junction where we told Guard Dog we would meet them and we only had to wait about five to ten minutes before they showed up. 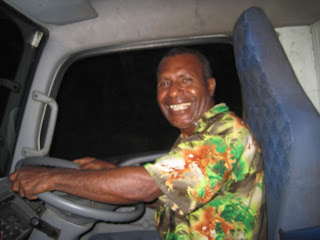 This is the old MP Wesley. Ryan got to ride up front while the rest of us bounced along in the back, but it was a whole lot better than hiking. 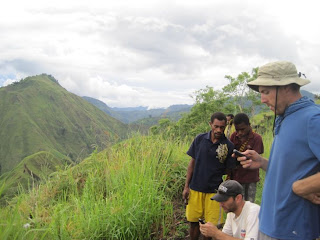 Can you hear me now? The joys of using technology in the bush. 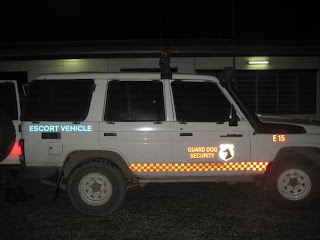 Our final ride sitting in front of the guesthouse office in Lae.

It was an amazing day to start off in a bush village house and end up at the SIL Lae Guesthouse with hot showers and clean sheets. We had hiked across rivers and streams, though the mud and slime to ride in the back of a flat bed truck and then finally a nice new Toyota Landcruiser with A/C. We had also been able to call ahead to the guesthouse and arrange a room and some cash out for dinner. So from taro and greens for breakfast to hot delicious Chinese food for dinner it was a day we will not forget soon. It also taught Ryan that if he had to get out of the village quickly and couldn’t get a helicopter that there was another way and so our final day checked off the last thing on his list of to-dos and that was to have a backup evacuation route.

So we all made it back home with stories to tell and pictures to share. Thank you all who prayed for our safety and protection on this trek and I hope you enjoy the photos as much as I had fun taking them.