How many mamas do you have? 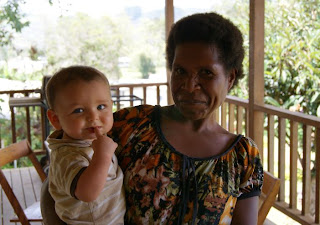 This is Greg with his Mama Anna. She comes three afternoons a week to babysit him while I am teaching at school, and also cleans up my house while she is watching him (even though I didn’t specifically ask her to do so. Hey, I’m not complaining!). You should see his eyes light up when she walks in the door! They get along very well. And she’s a good language influence on him too. He definitely recognizes the meaning of some Tok Pisin phrases, such as “paitim han” (clap your hands).

In , it really takes a village to raise a child. Children grow up being cared for by all of their female relatives, and not just their own mother. It’s common to call all your aunts “mama.” It can be confusing, for example, when the man who cuts your grass comes to ask you for some money for a funeral, saying that his mother died. Three months later, he again claims that his mother died. He’s not trying to take advantage of you… he just has a lot of mothers!

Greg has another mama too… Mama Iyuya. She watches him two afternoons a week. 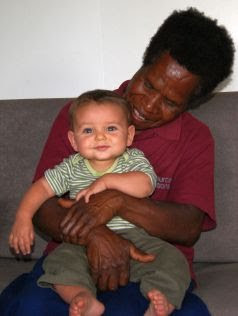 And so, if Greg were old enough to talk, he’d probably refer to his babysitters as “mama” though of course, I’ll always be his “mama true.”

Mama Anna was our haus meri too! Could you tell her that we say hello!