How do you design an alphabet? What is there to design anyway – can't they just use the English alphabet?

You might be wondering why it took us a week to come up with an alphabet. Actually, it really takes a lot longer than a week. The alphabet that the workshop participants decided on at the end of the week is only a trial alphabet. After a few years of trying it out and testing it, they will probably make changes to the alphabet itself and to the spelling rules so that it is easier for people to read. English has been written for so many hundreds of years that it's hard for us to imagine what it would be like to have an unwritten language. And the English alphabet just doesn't fit the sounds of their language. They don't have a Z or C or Q or X, and they have 7 vowels instead of the 5 in the English alphabet. 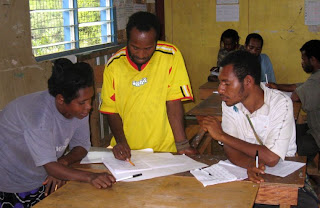 The workshop participants were representatives appointed by the different villages. We also had a mix of men and women, to try to get a broader range of input. 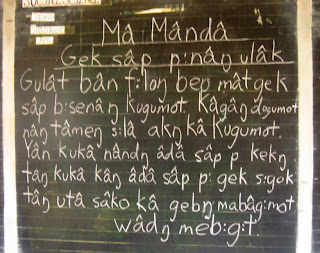 We started out by having the participants write stories in their language. We didn't tell them how to write it. We just let them struggle through it. In this example, you can see how this person tried to represent some of the sounds that aren't present in English. The colons that you see in the middle of the words and the "â" symbols represent vowels that we don't have in English, and the "ŋ" represents and "ng" sound. 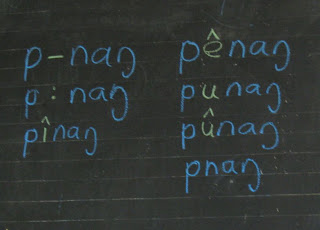 Then we walked through the different "problem" areas and shared as a group the different ways that people had chosen to write those particular sounds. There was a lot of variation. In this example, you can see that out of 13 participants, there were 7 different ways that they chose to write a particular vowel sound. We facilitated discussion in the group until they came to a consensus about which symbol they wanted to use to represent that particular sound. 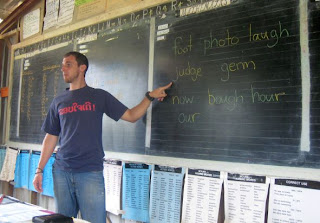 Here Ryan is explaining why English is not a good alphabet to imitate. In a good alphabet, each letter represents only one sound, and each sound is only represented by one letter. But in English, one sound is represented by the "ph" in "photo", the "f" in "foot", and the "gh" in "laugh". The opposite is also a problem in English. Think of how our letter "C" has two different sounds, as in "cat" and "city." Ask anyone who learned English as a foreign language, and they will tell you how frustrating it can be to learn to read and write it correctly! 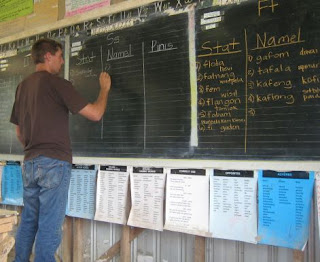 Brian and I helped out by being scribes at the black board during group discussions. 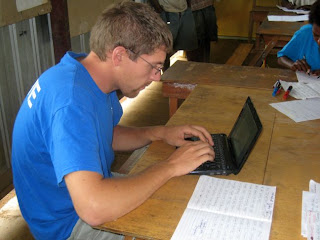 We also helped with data entry. 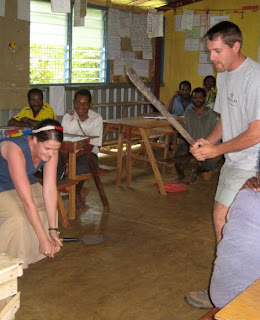 And even performed a skit (Brian doesn't usually carry a machete to class!)

By the end of the week we had produced a booklet that described the trial alphabet and the spelling rules that had been decided upon, along with sample stories written in the new alphabet. These booklets will be distributed around the different Mǎ Mǎndǎ-speaking villages. On Saturday morning we had a closing ceremony, and the participants each received a certificate. Here is the proud group with their booklets and certificates: 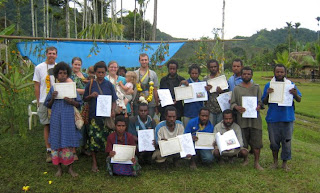