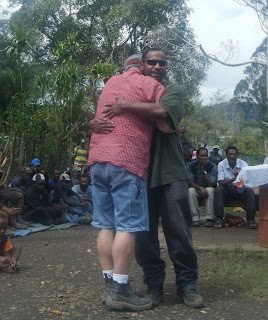 Below is a letter from the SIL Director about something that happened here recently – a really neat picture of God’s grace at work in the lives of Papua New Guineans. Our family didn’t actually attend the ceremony – we were in Lae the day that it happened. This type of public gathering, with an exchange of food, is a very cultural way for Papua New Guineans to seek reconciliation.

God began something great on Easter Monday that took another major step last Saturday, 2 July. Backing up a bit before that – through most of last year, the SIL centre at Ukarumpa was under significant criminal activity – house break-ins and invasions on an almost nightly basis. This calmed down some in October 2010 when a security guard was murdered, and the valley was crawling with additional police.

However, real change began at Easter 2011. One of the Ukarumpa village pastors conducted an evangelistic crusade, resulting in these young men, most of whom had done jail time, wanting to publically apologise to me, on behalf of all of SIL. The village pastors recognised that even if the former criminals had done jail time, and even if they had apologised to me, as director of SIL, they still needed to make a public apology to the people who were impacted by their former criminal activities. That happened last Saturday.

On Saturday a number of us went over to Ukarumpa village. The local pastors led in prayer and gave a message from the Bible. A drama was presented demonstrating their former criminal ways, culminating in them turning their lives over to Jesus, with a closing song in their local language, in Tok Pisin and in English, speaking of Jesus being their only friend. Then, each former criminal publically apologised for their crimes and the hurt that this caused. A few of them made a particular point of going to the owners of houses they had broken into, to apologise – including one young man who broke into my house in April 2009.

The community then gave a gift of lots of garden food, as a practical element of their apology. The size of this wonderful gift caught us a little off guard! We decided to use two vehicles to bring it to the meeting house for church on Sunday – to enable all to see the outworking of Ukarumpa village’s apology, and to receive some of this gift to SIL. They also gave several hundred kina in cash!

The former criminals were very conscious that a number of people have already left Ukarumpa on their furloughs, or left finish, and likely are still harbouring hurts. These former criminals would have liked to give their public apology to all who were impacted, but their hope, and my hope, is that this letter telling of what these former criminals did last Saturday will go some way to helping others begin to heal from the hurts of their criminal activities.

Church the next day was a testimony service! A few of the testimonies were related to these security events – people recognising and repenting of our own lack of faith and belief in the power of prayer; people commenting on a lack of balance between justice and grace and forgiveness. We are all on a journey, us in SIL and the Ukarumpa village community. My prayer is that this report will be an encouragement and help for you, along that journey. 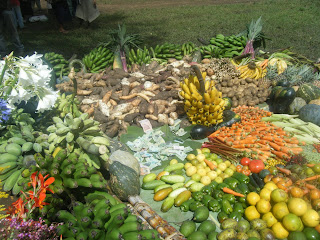 The gift of food that the people of Ukarumpa village gave to our commmunity. 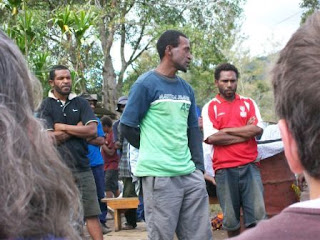 One of the former "raskols" apologizes for his former crimes.

Wowee Zowee! Sounds likes 1st century Christianity. What a tremendous story, blessing, and depiction of how best to attack some criminal problems, Jesus? Thanks for Posting