I (Susan) have really been enjoying my new job doing audio recordings of Scriptures in the Highlands languages.  It's exhausting, but fun.  This week I was working with David and Albert, two speakers of the Fore language. 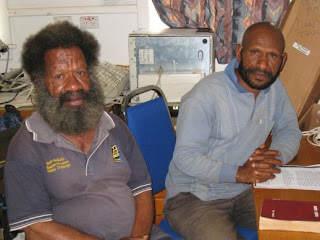 We spent a total of 10 hours in a quiet corner office to record four chapters of the New Testament.  One of the men would read aloud into a microphone, while the other would read along and stop him if he heard a mistake (like a mispronounced or skipped word).   I was manning the laptop, basically just pressing "record" and "stop", as well as deleting the bad parts and inserting the re-recorded bits, and checking to make sure the audio was coming through clearly.

Why are we doing this?  Why just four chapters? The Fore New Testament was published in 1974.  38 years is a long time to expect a book to last in a village setting.  Today there just aren't enough Fore New Testaments left to go around.  These recordings will be put onto solar MP3 players and used to do testing in the villages.  The idea is that for the languages like Fore that have already had New Testaments for a while, we can determine how good the translation is or if the language has changed enough that a revision is needed.  We also hope to raise interest in the communities about using the vernacular Scriptures, or perhaps even to get support for doing a recording of the whole New Testament.

My boss tells me that there are 36 languages just in the Highlands region that he would like to have these recordings done for.  Now I've crossed two off the list.  Only 34 more to go.  I know I won't get them all done before we leave on furlough, but hopefully I can at least make a dent in it!  I can't do these recordings every week, because Greg gets pretty cranky if he spends too much time in childcare.  So I have to take breaks in between, as well as allowing myself time to do the editing. But I'm hoping to get at least one or two done each month.

Now that the raw recording is done, I will spend a few hours editing it.  I'll remove background noise, breaths and lip smacks and things like that.  I'll also take out all the extra pauses that you get when you record someone who isn't a totally fluent reader.

Here, for your reading enjoyment, is an excerpt from the Fore New Testament.  It's Luke 15:8-10, the parable of the lost coin: