I had a good prenatal appointment at the clinic today, and that left me in a bit of a nesting mood.  Brian is on another out-of-town trip (coming back this afternoon – yay!) and so I have a bit of free time to myself.  Also, now that I’m in the second trimester I have enough energy to actually stay awake when Greg is napping, which gives me a nice two-hour chunk of me time.

I wanted to sew something for the baby.  It’s a fine balance, because we want to travel light on our way back to the States and don’t want a bunch of extra luggage.  On the other hand, I don’t know if I’ll have the time (or a sewing machine!) to sew up some things once we get there.  Plus, this whole not-finding-out-the-sex-of-the-baby thing kind of limits your choices when it comes to choosing fabrics and colors.  So I compromised and made a few small, gender neutral things. 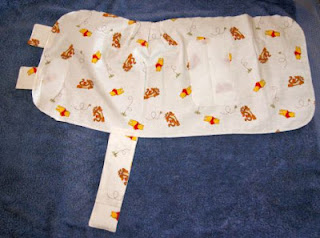 Project number one was a Straight Jacket Swaddler from this tutorial I found online.  I didn’t swaddle Greg very much, mostly because he was really good at wiggling out of anything I tried.  But I thought this pattern seemed worth a try.  It’s got a strap between the legs to keep it on better, and I liked the fact that it was so lightweight that it could be used in warmer environments.  I used a flannel Winnie the Pooh receiving blanket for the fabric. 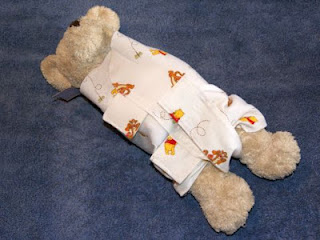 Since I don’t have a real live baby to experiment on, Teddy was coerced into being my model.  Follow the link to the tutorial to see it in use with an actual human baby. 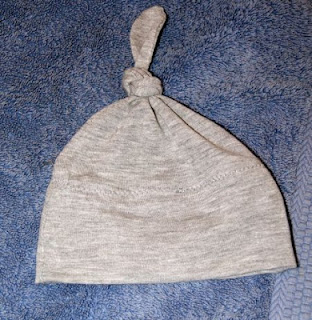 Project number two was a baby beanie.  Greg only ever wore sun hats, because he was born in July and then moved to the tropics when he was 7 weeks old.  The kid has been barefoot and in shorts his whole life.  (I guess he’s in for a surprise!)  But baby number two will be born in September, and will probably need some bundling up.  I used an old, super-soft knit shirt for this project.  For the hat, I used the instructions and pattern found here. 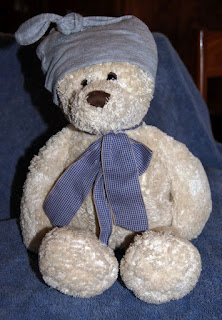 Once again, Teddy is my model.  I’m assuming that it will look better on a real baby, because I’m really hoping my child doesn’t have ears that stick out of the top of his head like that!  This was super easy, and so I think I’ll be making a few more hats in more adventurous colors.  I’ll probably try out some different styles too.  There are so many great free patterns on the internet these days.  (This is why Brian shouldn’t leave me home alone – our internet bill is going to be higher this month!)