We've been pretty busy at our house lately, but here are a few photos of my boys: 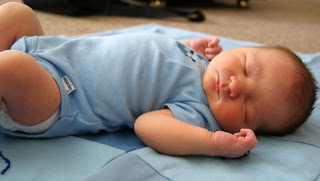 Love those chubby cheeks!  Caleb has been gaining weight and is already almost back to his birth weight.  This makes me extremely happy, since we had a rough time getting Greg to gain weight in the first few weeks. 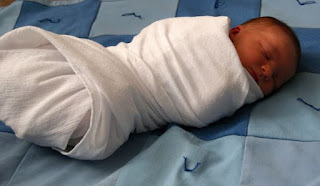 Sleeping again.  He does occasionally open his eyes, but we have yet to capture it on camera.  I made a few of these muslin swaddle blankets a few weeks ago after seeing them in stores, and I love them!  The little guy likes to be swaddled, and these blankets work great. 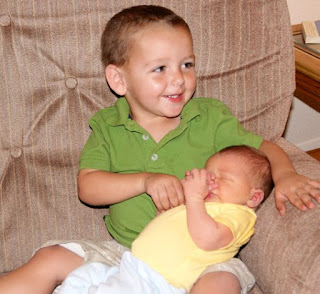 A lot of people have been asking how Greg is handling the transition.  For the most part, pretty well.  He gets very concerned when he cries.  He likes having baby Caleb around, and likes to "play" with him... 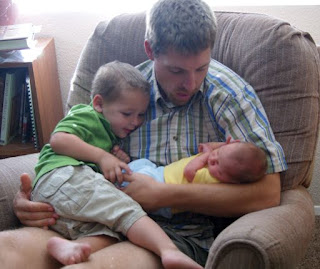 ...but we have also felt a bit like referees as we hover over the two brothers to make sure Greg doesn't get too.... um... enthusiastic in showing his love to "our baby." 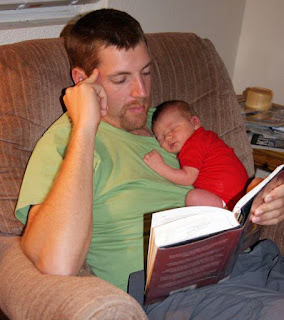 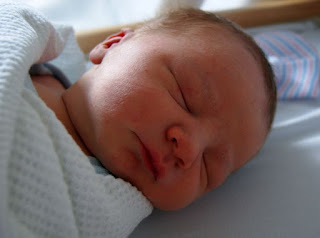 Thanks for all your prayers.  Things went exceptionally well.  We are at home now and adjusting nicely.  Greg is very excited about his new brother-sister (that's what he's been calling the baby, since we didn't know if it was going to be a boy or girl.  We'll have to work on that one...)

Looking for a new job opportunity?

Below is a video detailing the huge variety of personnel needs for the task of Bible translation around the world.  One of the biggest things that we pray for is that God would send more workers to the field.  I know that in Papua New Guinea, many of our missionaries are trying to fill more than one role because of a shortage of staff.

This footage was shot in Ukarumpa, and we know nearly all the folks that are shown in the video.  Makes me feel a little homesick!

I'm not sure if this is a post about the differences between living in America and living overseas, or if our return home just happened to coincide with Greg's discovery of television and fictional characters.

Two weeks before we left Papua New Guinea, our two-year-old had absolutely no interest in watching TV.  Not that we have TV per se (that would require the local broadcaster to actually pay their bills so that they are allowed to broadcast the one local channel), but we do have a dvd player in PNG.  We occasionally tried to get him interested in watching a cartoon, but he would completely ignore it, except perhaps at the credits, when he would stop playing long enough to point out the "ABCs!"

But then one day Brian decided to show him part of Cars 2, and suddenly something clicked.  He was glued to the screen, watching all those cars.  From there it quickly branched out into Thomas the Train and Bob the Builder, thanks to some friends who loaned us episodes.  Still, he didn't really identify the characters by name.  He had a Thomas the Train shirt, but when people would ask him "who is on your shirt?"  he would stare at them like they were stupid and then reply "choo-choo."  He didn't know Thomas from any other train.

Somehow, soon after our arrival in the U.S., all of that changed.  He can now name nearly all the major characters from the Cars movies and Thomas the Train.  He was thrilled when I bought him a Lightening McQueen t-shirt and a Thomas the Train t-shirt.  And then I found some Thomas shorts at a garage sale, and he insisted on wearing his Thomas outfit for three days straight, until I finally hid it in the bottom of my laundry basket so that I could wash it. 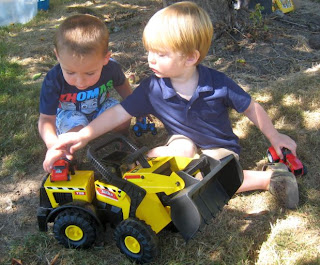 (Greg and one of his new best buddies, a second cousin who is also obsessed with tractors.  I think this was day two of the Thomas the Train outfit.)

The other day we were walking through a big box store, and he managed to point out every single Lightening McQueen he saw on packaging (and let me tell you, that little red car is selling everything from sheets to toothpaste to fruit snacks!).  I figure Greg probably would have learned the names of all these characters had we stayed in PNG, but here in America, I've come to realize just how much manufacturers take advantage of it to sell things.  I think that if we were still in Papua New Guinea, he would still be fond of Thomas and Light-ma-queen, but I don't think it would be quite the obsession that it is here. 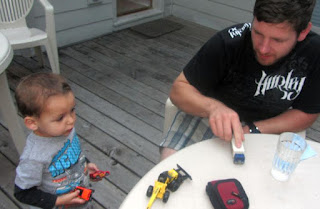 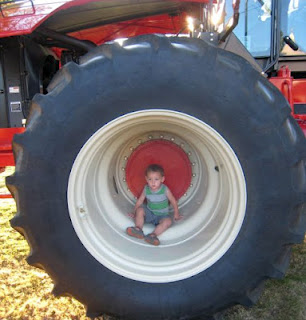 On Saturday afternoon we went to the Oregon State Fair with Brian's parents.  This was an American experience that we really wanted to share with Greg, since the county or state fair played such a big part in both of our childhoods (Brian was very involved in FFA, and I was in 4-H from age 8-17).

Brian's mom had a display for her dahlia business, so she got some free tickets.  Her display was definitely the best one in the flower building. 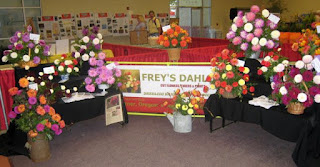 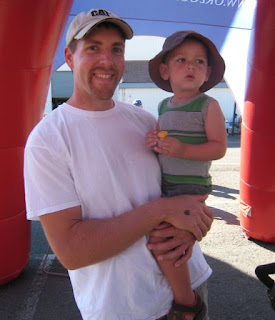 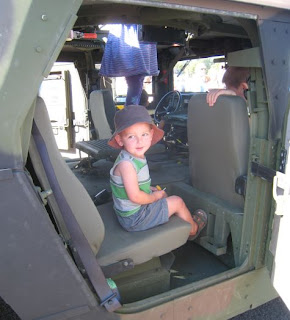 Greg got to sit in the "army trucks" at the National Guard display.  His uncle Tim is in the Guard, so Greg thought that was pretty cool. 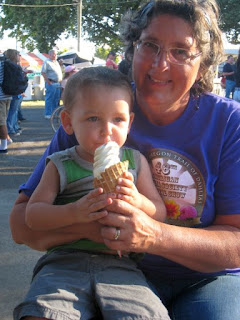 Grandma agreed to "share" her ice cream with Greg, but he wasn't really in a sharing mood.  Poor grandma! 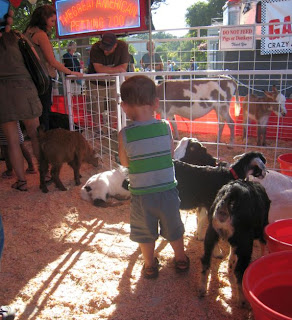 The petting zoo was a big hit!  How they get all those animals so tame that they are willing to be poked and prodded by little kids all day long is beyond me... 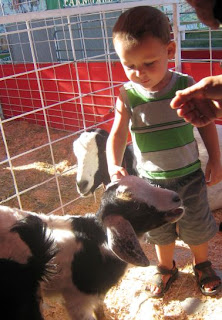 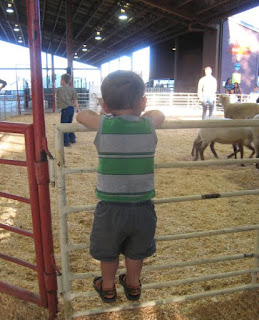 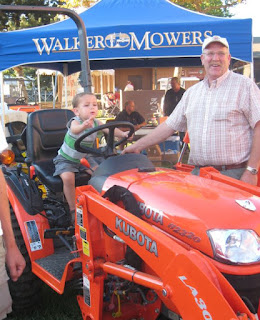 Lots of tractors to "test drive." 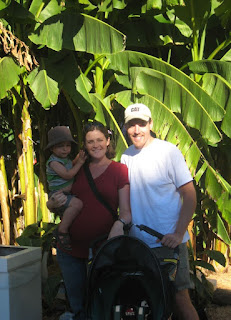 We even managed to find a grove of "exotic" banana trees.  Greg recognized them as "lala" trees right away, even though they didn't have any fruit on them.  A little reminder of PNG...

I can't keep my coffee pot plugged in

I think I said that my next post would give you an idea of what it has been like adjusting back to life in the U.S. after years overseas.  Now we've been back for more than a month, and so much has happened that if I tried to tell all, it would make a very, very long post.  So instead, I've decided to try and do some short posts that show vignettes, if you will, to give you an idea of what this time of transition has been like for us.  (And I'll try to post some photos too, even if they are totally unrelated to the story, just so that you all don't get too bored.)

First off, here is a totally unrelated photo for you: 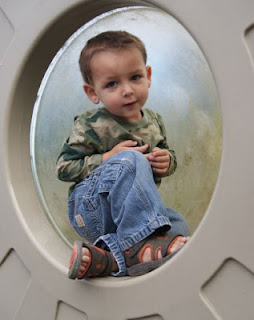 One of the fun things about being here is that there are lots of parks to explore.  We take a walk with the stroller and have been checking out the parks near our house.  Greg has really been enjoying this, and it's interesting to see him watch other kids playing and then follow their cues about playground behavior. (Some of which is good, and some not-so-good!)

Ok - so the title of my post was "I can't keep my coffee pot plugged in."  I'm serious about this.  It's not that I've somehow forgotten how American outlets work.  It's just that Brian and I have become extremely conscious about not wasting electricity, and it's a hard habit to break.  In Ukarumpa, we paid about 40-50 cents per kwh for electricity.  Here in Oregon, we only pay about 13 cents per kwh.  That's a big difference!  In Papua New Guinea, we did just about everything that we could to minimize our electric bill.  Here in the U.S., we are both compulsive about turning off lights and unplugging things that we aren't using.

So every morning, I plug in my coffee pot, brew a cup for myself (Brian is only a social drinker, not an addict like me), and then, after breakfast, I not only turn off the pot, but I also unplug it.  If I don't, then that annoying digital clock will blink at me because I never set the time on it.  It will blink and blink and blink, and as the numbers slowly count upwards from 12:00, it mocks me, saying "I'm wasting electricity!  I'm costing you money!"

Maybe this is a habit that we will break before we are done with furlough, but I guess it's a pretty harmless one, and might actually save us a few pennies over the course of a year.  But if you come over to visit us and find us sitting around in the dark, feel free to say "Lighten up guys!  You're in America now!"
at 6:25 AM No comments: