Finding Nemo (as told by Greg) 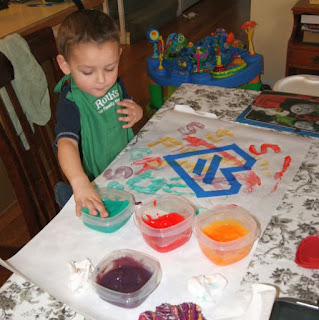 This photo of Greg today has nothing to do with Finding Nemo, but people like pictures.  This is us making a welcome home sign for daddy (who gets home from a trip to Texas tonight).  (Thanks Heidi for the finger painting idea - I totally copied you!)

Greg is a talker these days.  When he is not singing at the top of his lungs, he is telling stories.  Sometimes they are nonsense made up from his fertile imagination, but often he re-tells stories from his favorite videos (currently Thomas the Tank Engine, Bob the Builder, or Finding Nemo).  The way he interprets the stories is sometimes amusing.  I have been meaning to record some of them for posterity.  Here is his re-telling of "Finding Nemo."  (Just in case you get confused, the man with the screwdriver is a dentist, the "purple kid" is his niece Darla, and he got confused somewhere in the middle and was thinking about the Hot Wheels car that he got at the store the other day)

He lay there and the man go he give Nemo to the kid.  He open the door and he stand up on the chair and he have some cookies.

And he got a car at the store.  He got a blue car like me got a yellow car and bring to the house.

(What happened to Nemo?)

(What about the turtles?)

And that is when the voice recorder on my phone cut out.
at 8:39 AM

I think that is a fantastic story! And, I'm glad you stole the idea. That's one of my goals. Looks like he is quite the artist in more ways than one. :)