Didn't I just do one of these Caleb update posts?  Has it been another month already? 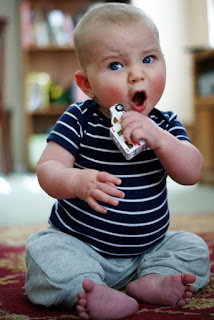 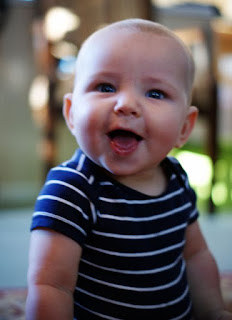 This one is a little blurry, but I love that smile... 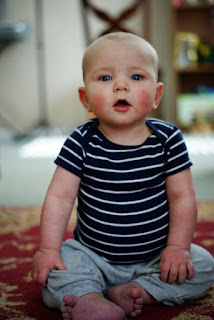 We had a little scare with Caleb this week.  We decided to buy some formula and try it out so that we would have a backup if we left him with grandma and grandpa overnight and they ran out of milk to feed him.  Well, within minutes of eating, he developed a skin rash wherever the formula had touched his skin.  (The marks on his back are just from me touching him with unwashed hands).  Before long he was vomiting and pretty much his entire body had broken out in a rash like the one below. 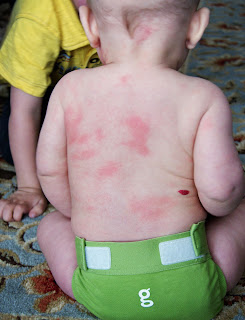 Even though there were no breathing problems, his face was getting a bit swollen and so I took him to an urgent care clinic.  They wouldn't treat him because they said they didn't have the ability to help him if the reaction got worse, so they sent us to the local emergency room.

So now we are suspecting a milk allergy.  I shouldn't be surprised, because I had lots of allergy problems (including milk) when I was a child.

I never thought I'd be a person who would voluntarily go on a dairy-free diet... I love cheese and butter too much.  But it's funny how I vowed to forgo the enchiladas in an instant when I was watching my miserable little boy go through this.  Although I haven't noticed Caleb having any problems related to my diet, I've decided to eliminate dairy for the time being.

In short, I'll just say that I have a new respect for my mother, who used to stay awake at night by my bed to make sure I was still breathing when I was having troubles with asthma.  She used to drive to the emergency room in the middle of the night and wait with me in the parking lot so that she could whisk me inside if my reaction got any worse.  She was vigilant over every snack I consumed at parties to make sure there were no nuts.  Thanks mom!

But on a lighter note, here are a few photos of Greg, just to share the limelight: 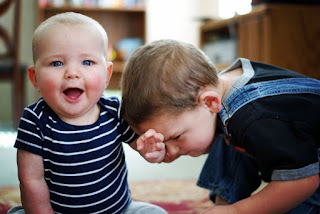 For some reason, Greg persists in believing that head-butting is an appropriate way of showing affection.  I think these two are going to be best friends half of the time, and worst enemies the other half! 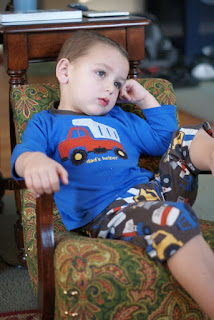 I know Greg looks utterly bored in this photo, but he is actually enjoying watching us play Just Dance on the Wii.  He will very occasionally join us, but prefers to stay in his chair and dictate which songs we choose.  "No, not that one.  Do the one with the two mans,"  or "Do the lady who goes like this (demonstrating a hand motion)"