Things we do for our kids

A certain little boy in our household loves trains.  And so on Saturday morning, when Brian read an article in the Denver Post that all public transportation was free that day to celebrate the opening of a new light rail line, he asked me if I thought I would be fun to take Greg for a little train ride.  Sure, I said.  We can go downtown and have lunch!

Well, it turns out that tens of thousands of other people had the same idea: 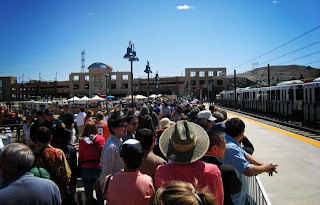 Finally - the front of the line is in sight!

The really funny thing is that there are no train stops anywhere close to our house, and so we actually drove a half-hour so that we could stand in line for an hour to get a 40-minute train ride into downtown Denver.  Oh... the things we do to make our kids happy! 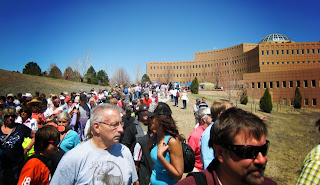 And here is the line stretching out behind us.

Fortunately, the organizers had done a good job of creating a festive atmosphere.  There was food and live music and all sorts of booths.   All sorts of activities that we could have done... that is, if we weren't paranoid about losing our spot in the line to ride the train! 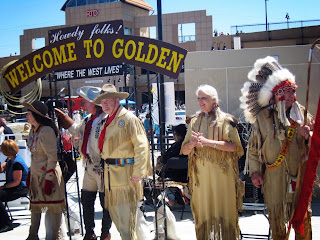 But the line snaked past one booth where Greg spun a prize wheel and won this little yellow car.  What a blessing!  It kept him occupied and in a good mood the whole day! 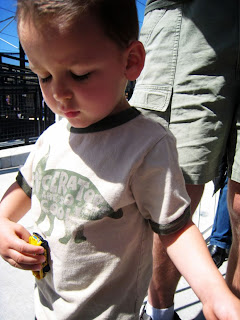 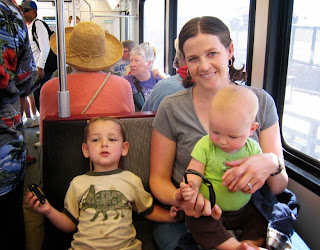 Yay!  We finally made it on the train! 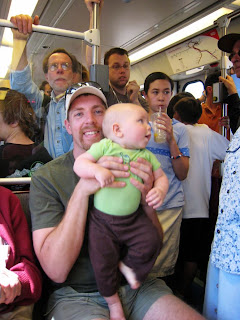 As you can see, it was a little bit crowded.  Caleb was in heaven, with such a captive audience to blow raspberries to and babble at. 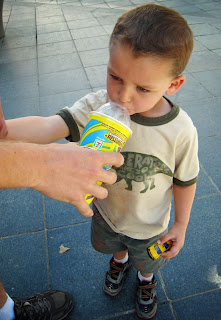 We did make it downtown, and walked the 16th street mall.  We had lunch outdoors and people-watched.  Afterwards, Brian ducked into a 7-11 and Greg got his first ever taste of a Slurpee.  He was instantly hooked, which made Brian proud.  (I'm not that much of a Slurpee fan myself.)

The lines to get on the train to go back to the suburbs were mercifully not long at all, although it was still crowded enough that we only snagged one seat between the four of us.  I sat with Caleb on my lap, and Greg pranced around between my legs and those of the family that occupied the other three seats in our section.  Greg, having no fear of strangers and even less concept of personal space, drove his little yellow car all over the legs and arms and head of the young man sitting across from us, and entertained all around with very repetitive renditions of "Jingle Bells" and "The B-I-B-L-E."  Phew!  Was I ever glad to get back to our house!  But it was still a fun day out, and Greg was thrilled by his train ride.
at 5:56 AM