We wanted to take a family camping trip this summer while we were still in Colorado, so this past week we spent three nights at Cold Springs campground in Arapaho National Forest (near Blackhawk).  We wanted something that wasn't too far from Denver, and that was small-child friendly.  This campground worked out pretty well! 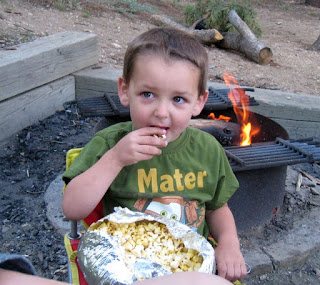 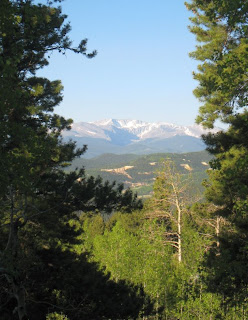 This photo doesn't do the view justice.  You could look out the window of our tent and see a gorgeous view of the Continental Divide. 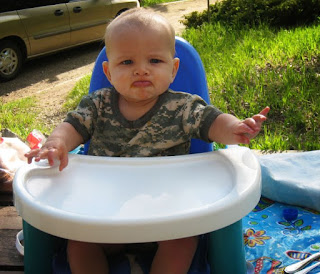 Caleb has been doing this tongue thing a lot lately.  He loved being outside, and carefully examined everything he could get his hands on, gravely pronouncing his current favorite "word": "Digga digga digga!"  (And then he would stick whatever it was in his mouth, of course.  I'm not sure how many rocks he ended up eating...) 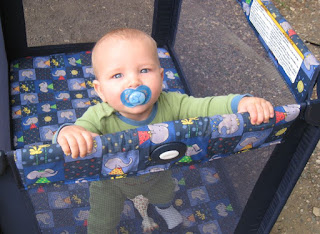 Oh!  I am so glad we remembered to bring the pack-n-play!  With a crawling baby who likes to pull himself up on everything, it would have been a nightmare trying to keep him out of the fire.  This way he could be near us, but contained if we had to put him down.  I'd like to say it kept him clean too, but Greg kept pouring dirt and rocks in there because he didn't want Caleb to feel left out. 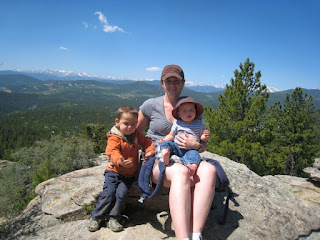 There were lots of hiking trails within a short driving distance, but hiking with an almost-three-year-old can be a frustrating experience.  So we basically stuck around the campground.  We did do a very short hike up to this viewpoint, and also explored an old jeep road that left from the campground. 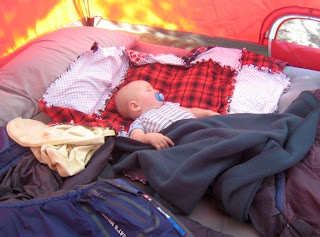 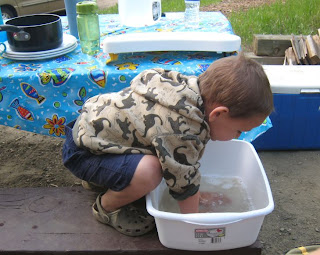 Greg loved the washing-up tub.  He spent lots of time washing his hands.  (That didn't stop him from getting ridiculously dirty though). 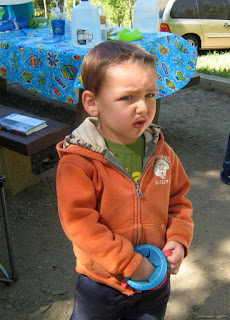 See the dirt-lined mouth?  I suspect that someone has been eating the goldfish that fell on the ground. 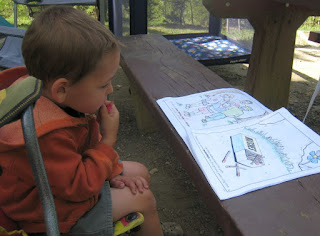 We got a lot of mileage from the Smoky The Bear coloring book that the camp host gave us. 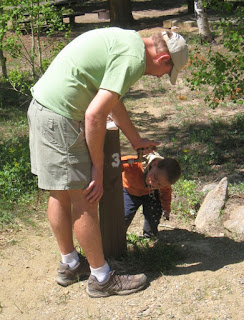 Part of Greg's daily routine was wandering around the campground (going through all the empty sites along the way), and drinking from each of the water spigots.  He would say, "Let's go take a number one drink."  (As you can see, they were all numbered.  Number one was the one closest to the playground... hmm... maybe that's why it was his favorite!) 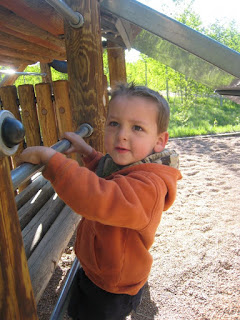 Yes - a playground.  One of the reasons we chose this campground was because it had a simple play structure.  We spent lots of time there. 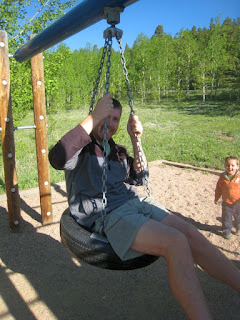 Brian gets in touch with his second grade self. 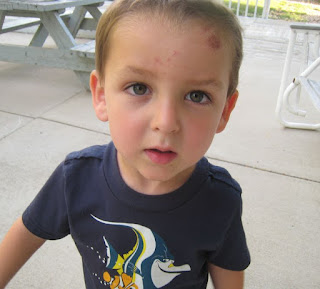 The playground gave us a little parting gift though.  On our last morning, just before packing up, Greg somehow decided that it would be a good idea to run down the slide.  He hit pretty hard, and skinned up his forehead.  So we broke camp to the sounds of loud crying from a little boy who felt very sorry for himself.  Ah - the joys of camping with small children!