Lots of photos for you this week!

We are back from our eight-day trip to Madang, leaving the hot and mostly sunny coastal weather to find that Ukarumpa has been pretty soggy and grey in our absence.  That's OK - we were thrilled to come home to a nearly-full water tank! 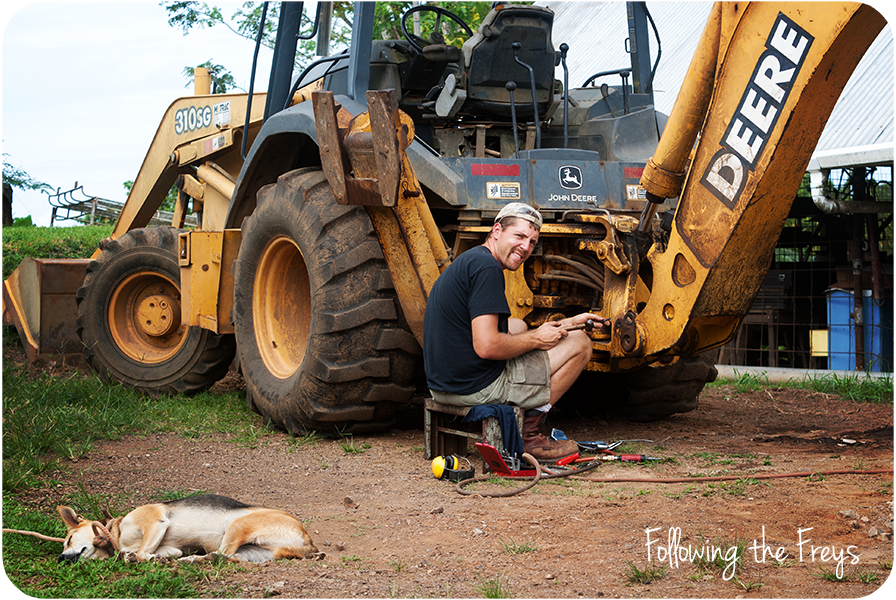 As I mentioned briefly last week, Brian was invited to "lay hands" on some of the machinery at POC (Pacific Orientation Course), the site in the hills above Madang where new missionaries serving in the Pacific get their cultural orientation.  Since Brian has been to Madang several times in the past year and it's been about three years since I last went, we decided to make it a family trip.  POC asked me to bring my sewing machine, and I sewed some new curtains for some of the rooms there. 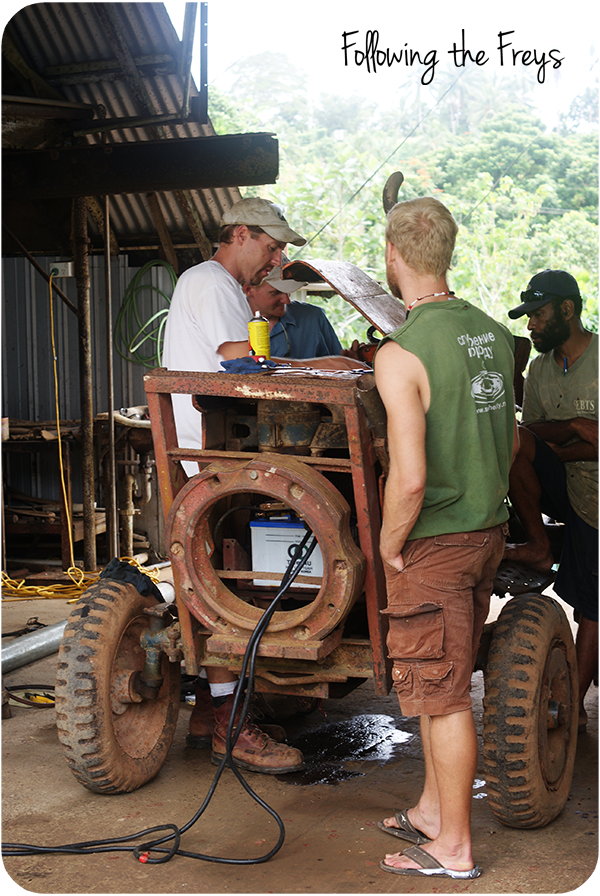 Brian had plenty of work to do, with a backhoe and two tractors needing a bit of TLC.  Unfortunately he was not able to completely fix all the problems during our week there, and new parts will need to be ordered, but he did do a lot and was able to leave some follow-up instruction for the staff there. 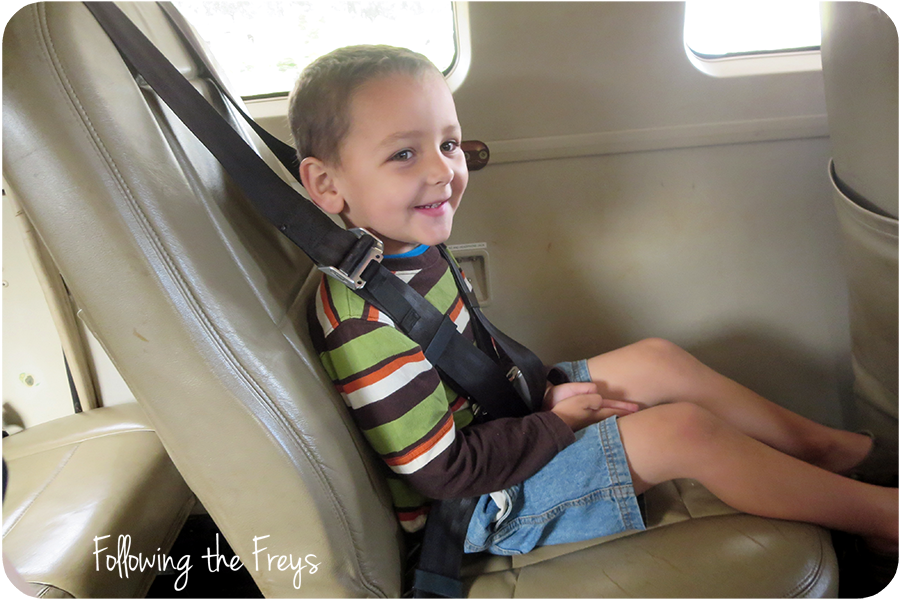 This little boy was VERY excited about our trip - especially the part about flying in the Kodiak.

Although this was a working vacation, it was very nice to have a change of pace.  Things definitely move at a slower pace at POC!  The campus is outside of town, on top of a mountain.  I think someone told me that it's at about 1,000ft elevation.  That means that it's a bit cooler and you get some lovely sea breezes. 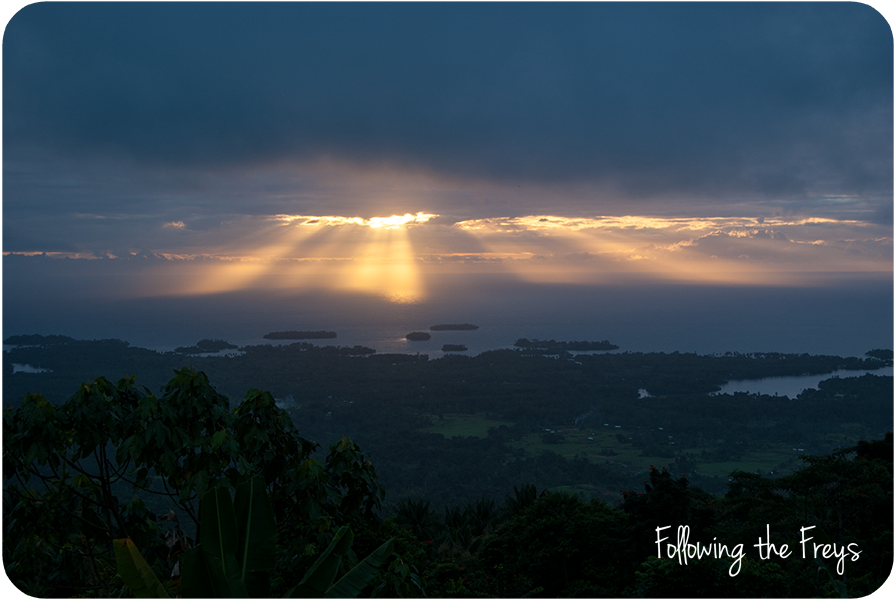 A sunrise view of the ocean from the house where we stayed.  It takes you about thirty minutes to drive down the mountain and actually get to the beach, but the view is spectacular.

We brought very few toys and books for the boys, and so we amused ourselves with other things. 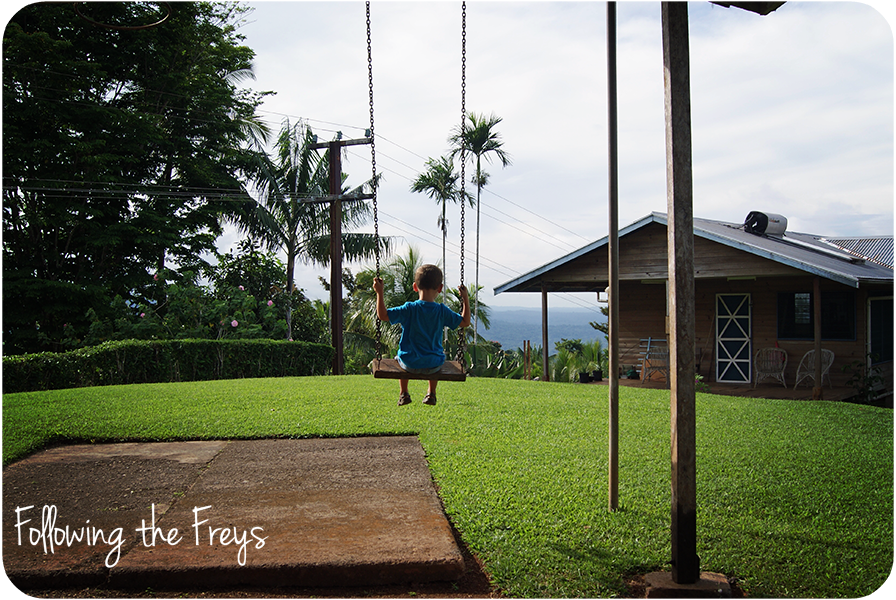 This swing was visited daily. 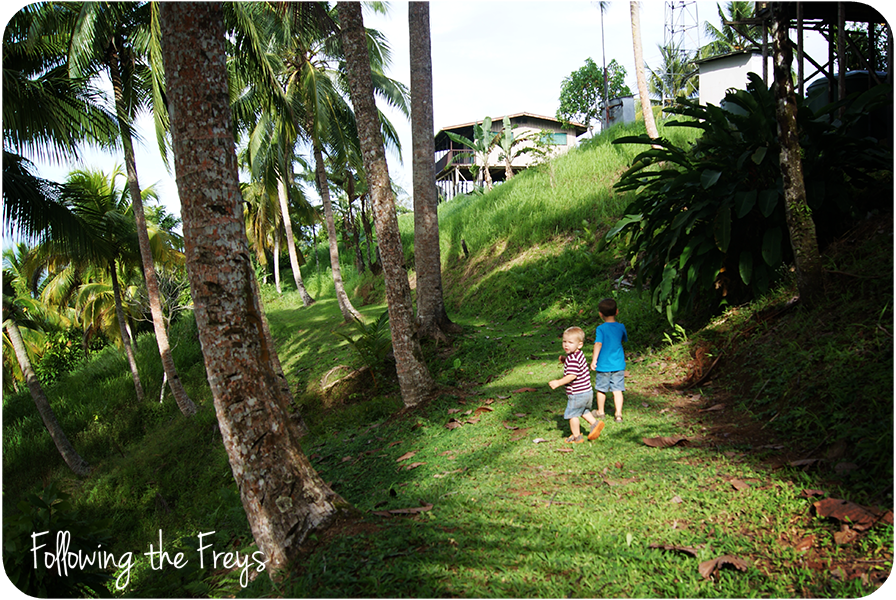 I can't count the number of times the boys and I walked this little trail.  That's the house where we stayed at the top of the photo. 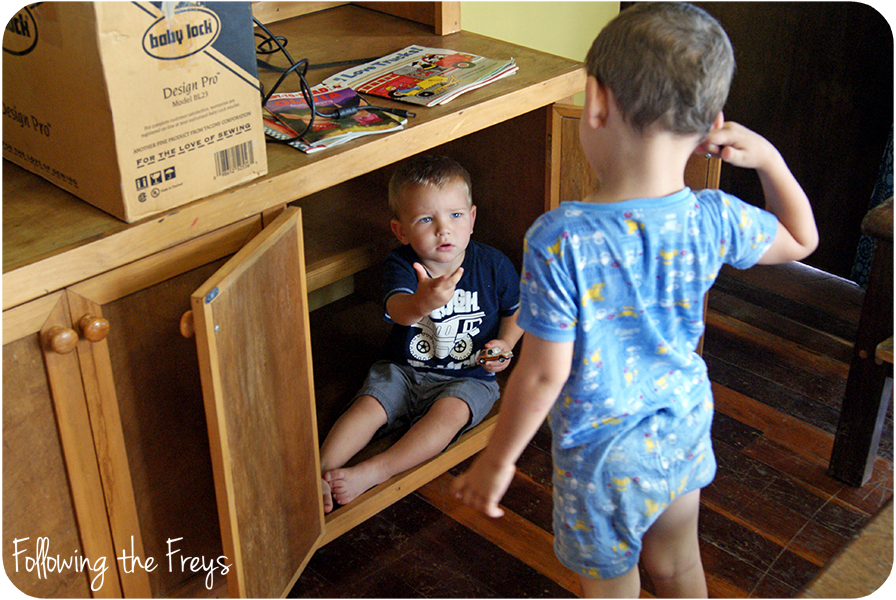 Empty cupboards in the living room kept Caleb entertained for hours.  After we got back to Ukarumpa I caught him peering in my kitchen cupboards as though he was trying to figure out if he could fit in there somehow.  (Sorry buddy - not happening!) 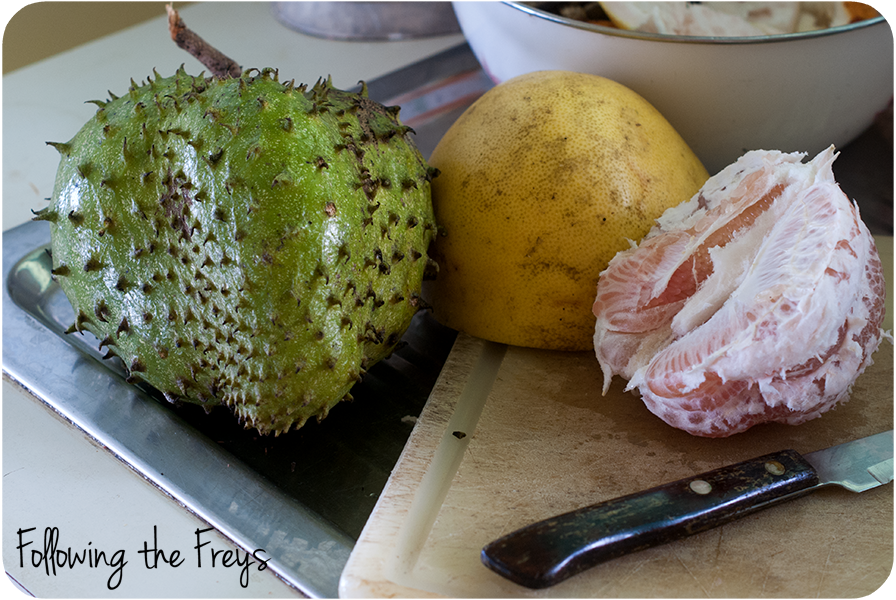 We enjoyed some tropical fruits that we seldom see up in the highlands.  The green spiky one is soursop and the yellow one on the right is a pomelo (kind of like a giant, not-too-tart grapefruit) 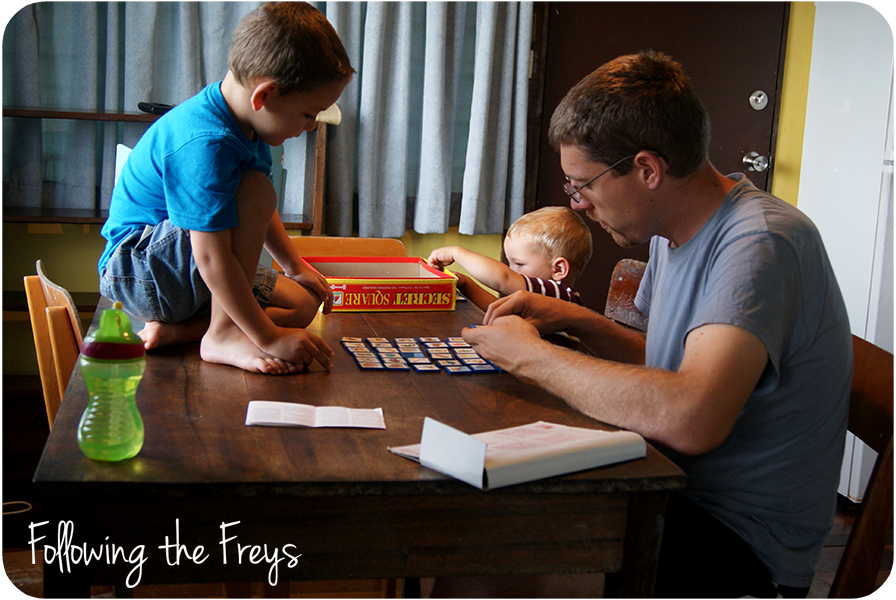 In the office at POC we found a shelf full of children's books and this game (Secret Square), which Greg played over and over.... and over again. 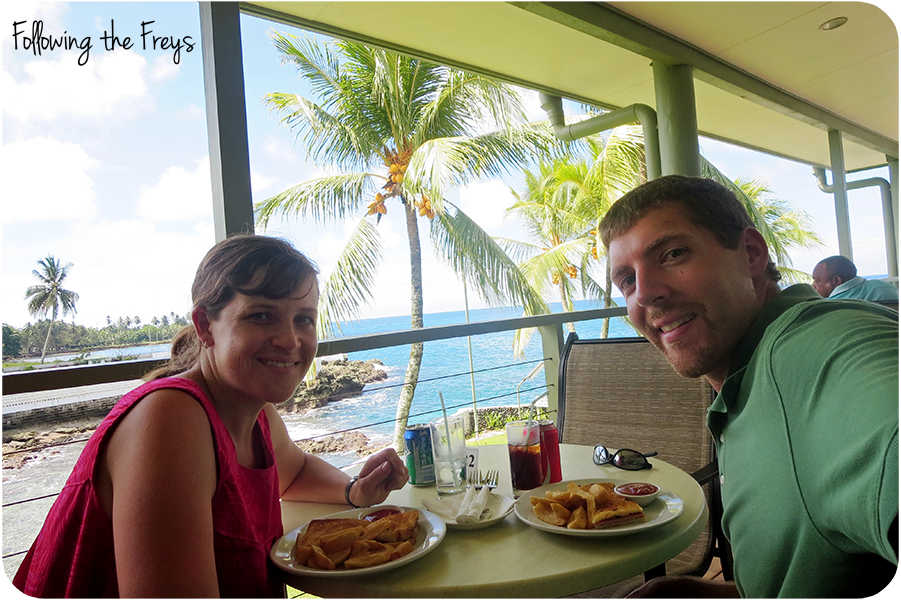 We actually only went into Madang town once the whole time we were there.  Some friends from Ukarumpa were vacationing in Madang at the same time, and they actually volunteered to watch the boys for us so that Brian and I could have a meal out by ourselves!  This is at the Madang Lodge (not the Madang Resort, fellow PNGrs - if you haven't checked out the Lodge yet, you should!) 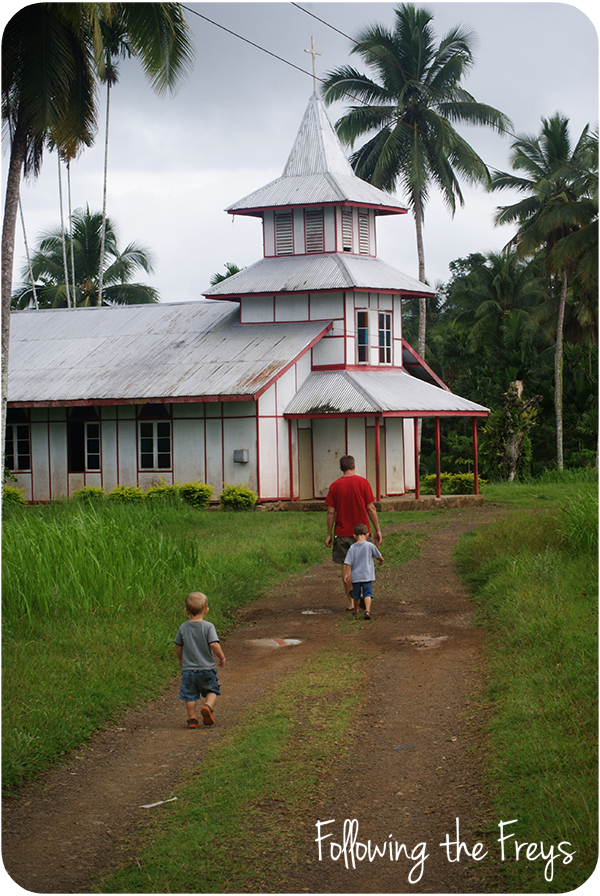 On Sunday we attended a service at the local Lutheran church. 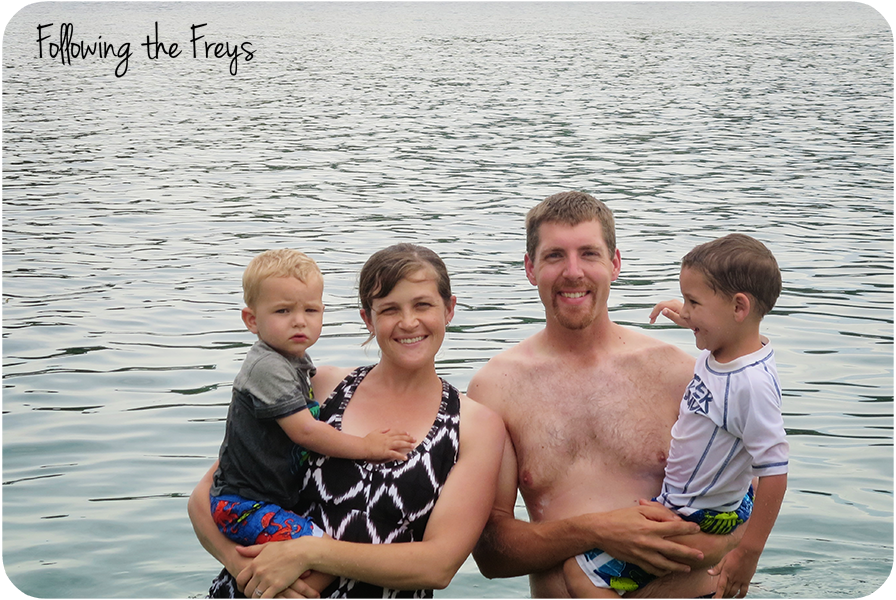 And twice we made it down the mountain to do a little swimming at Jais Aben Resort.  They have a nice little kid-friendly beach which you can use if you buy some food and drinks from their cafe. 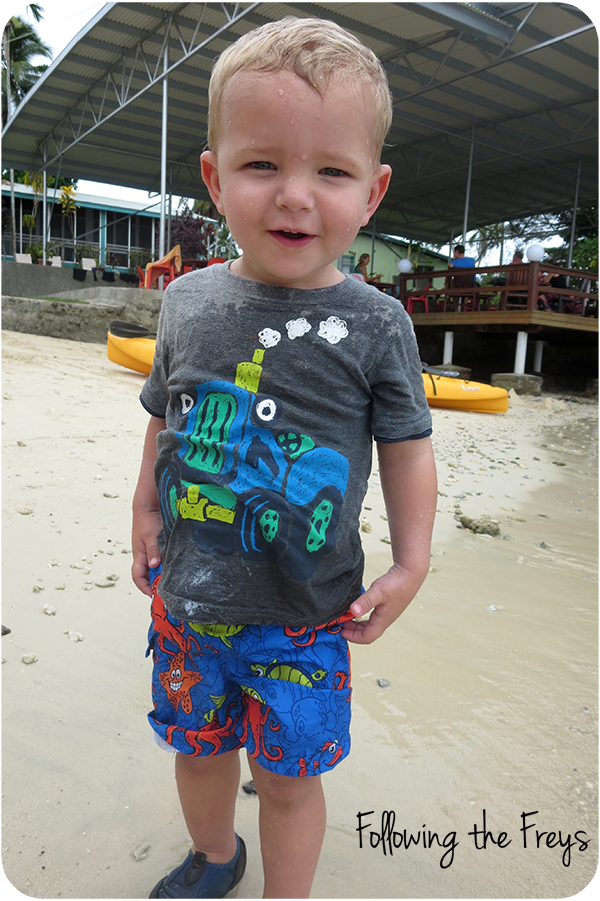 This little guy loved the water.  After the first trip, he would get sooooooo excited whenever he saw the ocean, and would ask to "go down splash in water down there." 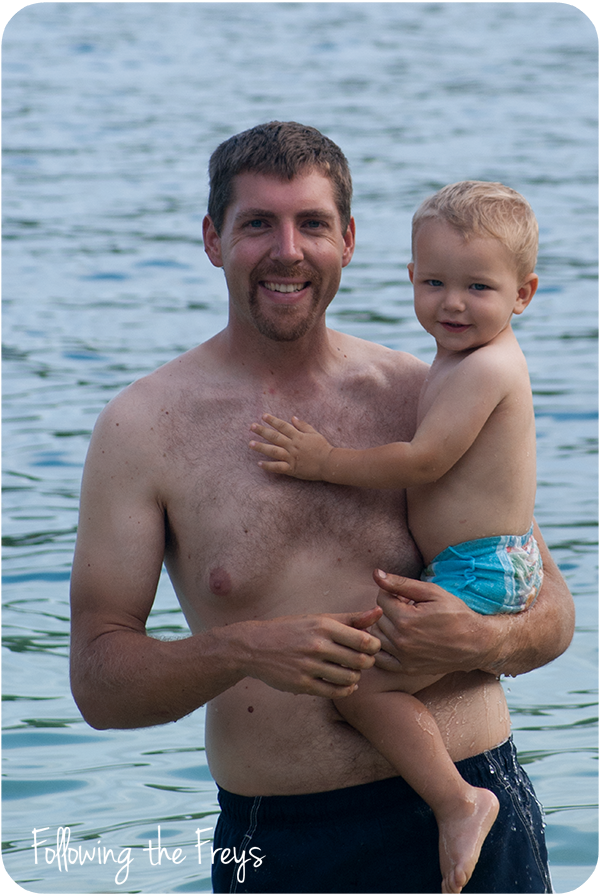 We flew back to Ukarumpa on Friday. 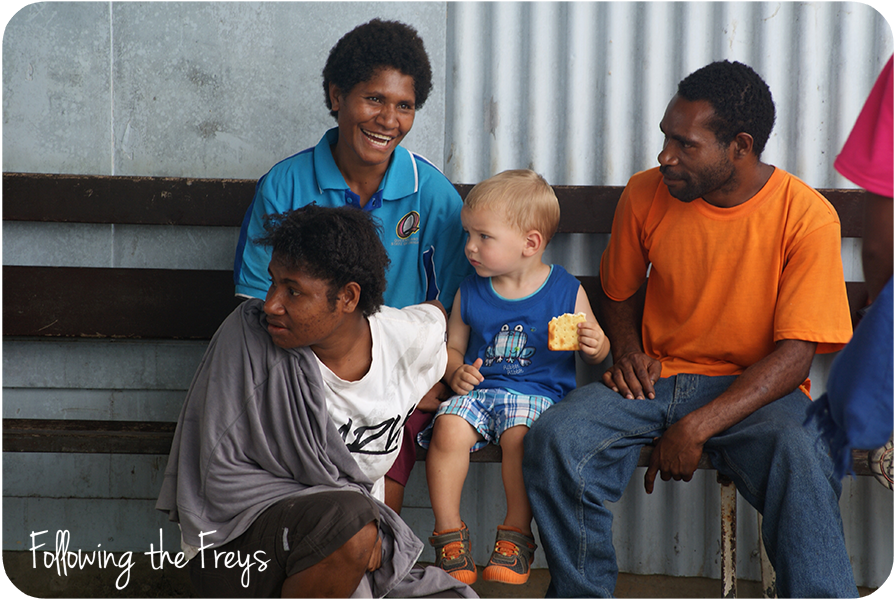 Caleb is so friendly and absolutely comfortable with strangers.   While we were at the airport waiting for our plane, Caleb found a small space on a bench and inserted himself between these complete strangers.  (This was after he made the rounds and shook hands with everyone who was at the hangar.) 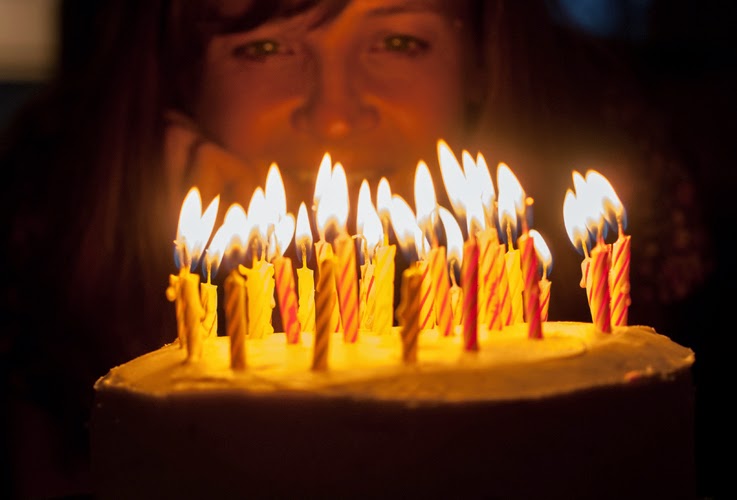 And yes, we did fly back on my birthday, and we got back home early enough to bake a cake and make some enchiladas for dinner.