We started out our week trying to fit in a bit more Colorado fall fun before we had to leave. 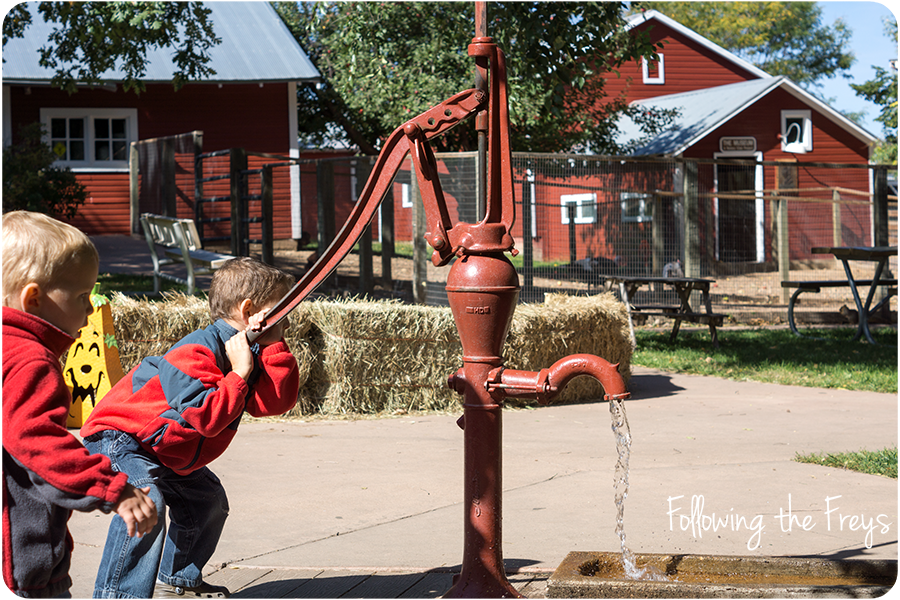 We took the boys to The Farm at Lee Martinez Park this week.  They had a blast. 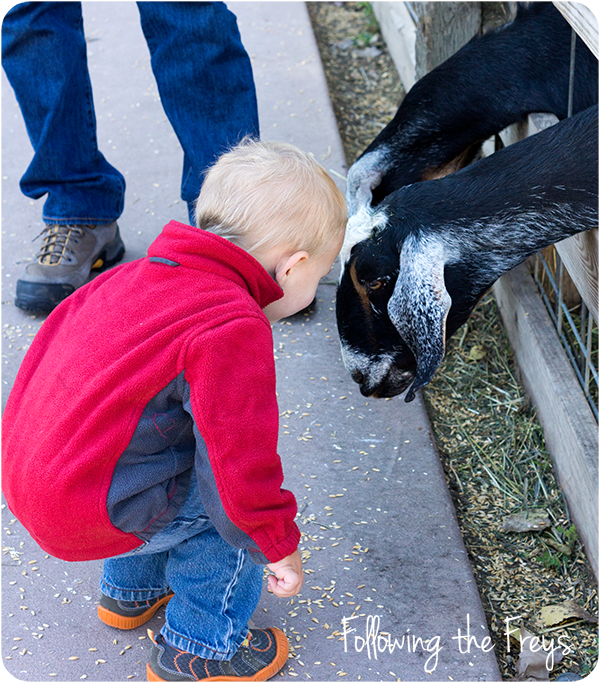 Caleb gets acquainted with the goats. 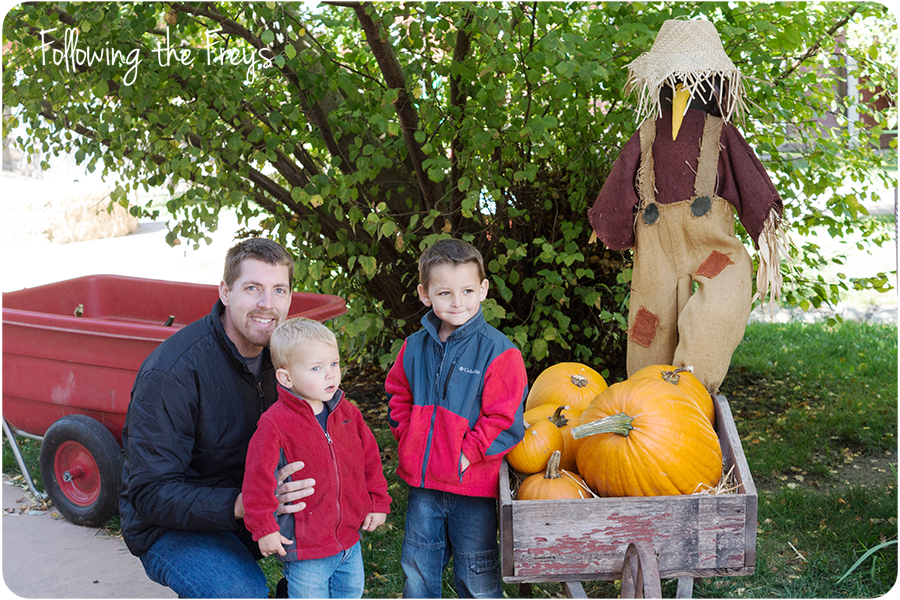 They wanted to get a pumpkin, but we said they would have to wait until we got to Oregon.

We drove up to Estes Park Sunday afternoon.  We were a little late to see the most spectacular fall color, as many of the aspens had already dropped their leaves.  Still, it was a good outing, and I had really wanted to go for a drive in the mountains before winter hit Colorado.

We didn't realize that last weekend was Elk Fest, and the town was packed with people coming up to hear the elk bugling.  Sighting elk in Estes Park is kind of like shooting fish in a barrel.  As you can see, this herd was right in the middle of town, and was surrounded by a camera-toting crowd.  We just did a quick drive-by: 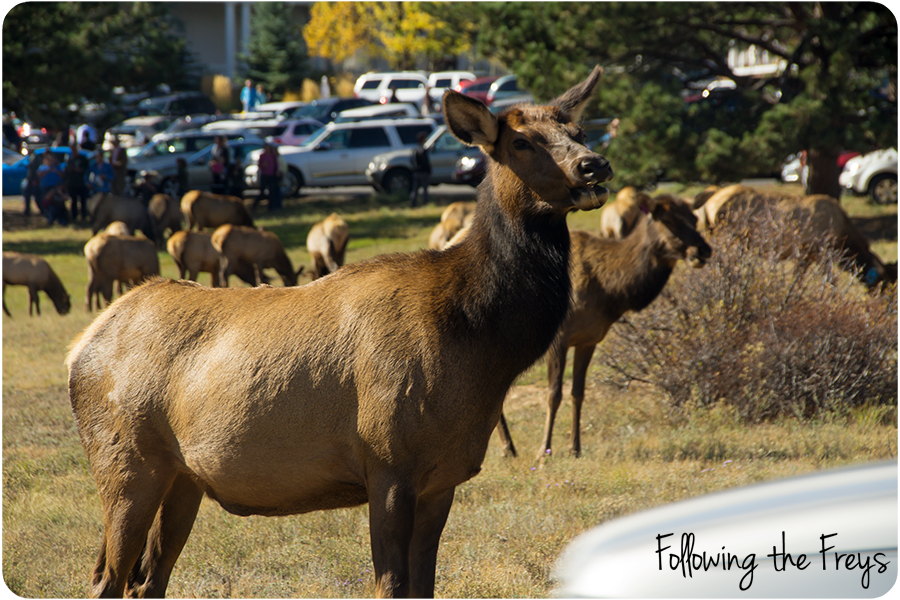 We then drove up Trail Ridge Road.  Greg was super excited about "going to the snow mountains" and the whole way he talked and talked about playing in the snow. 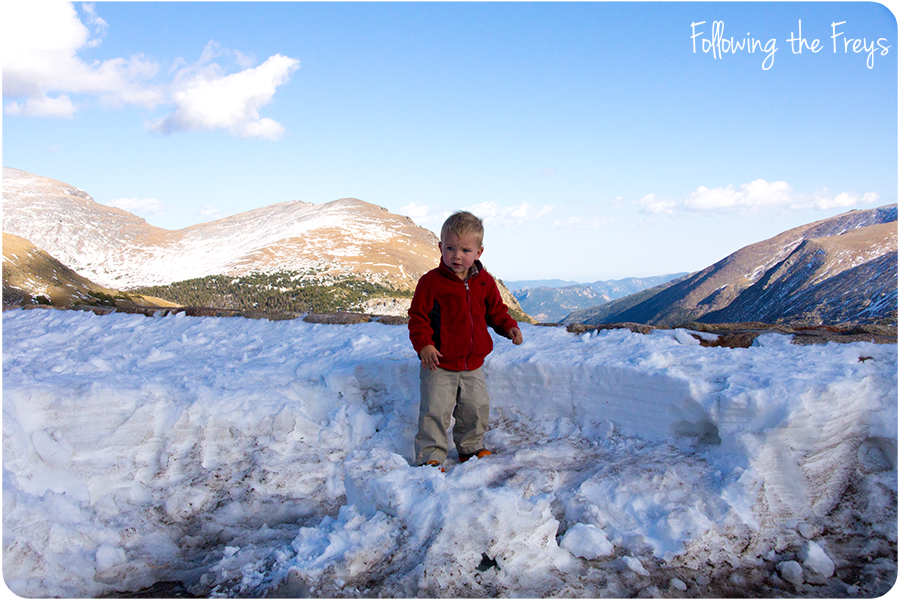 When we got there, Caleb was the one who actually enjoyed playing with snow.  It was too cold for Greg. 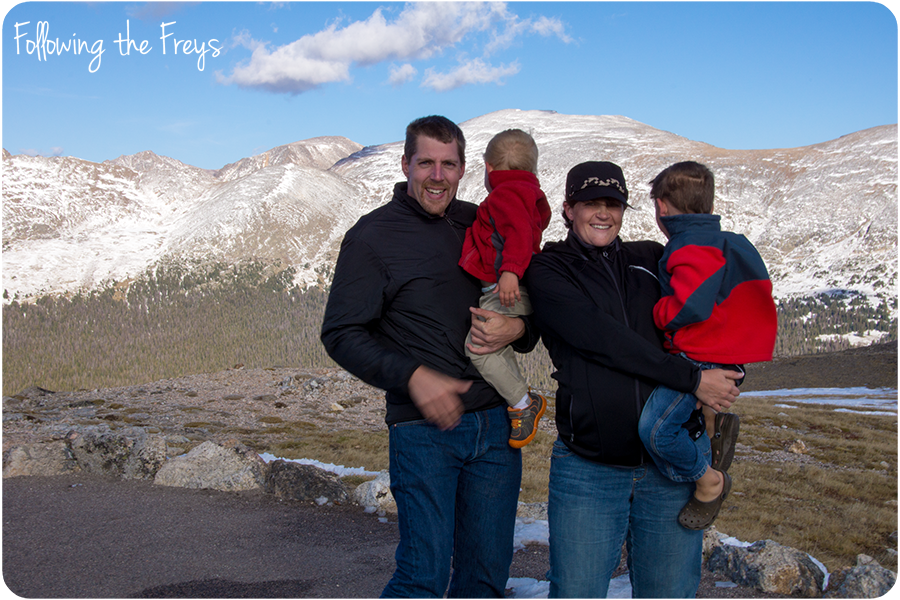 We asked the boys if they wanted to climb the trail to the lookout, and they were both eager.   By the time we made it to the top, both had changed their tune.  It was very windy and COLD!  A stranger offered to take a photo of us, so here is Brian and I attempting to face into the wind, while the boys turned their heads and cried.  They were very happy to get back to the warmth of the car! 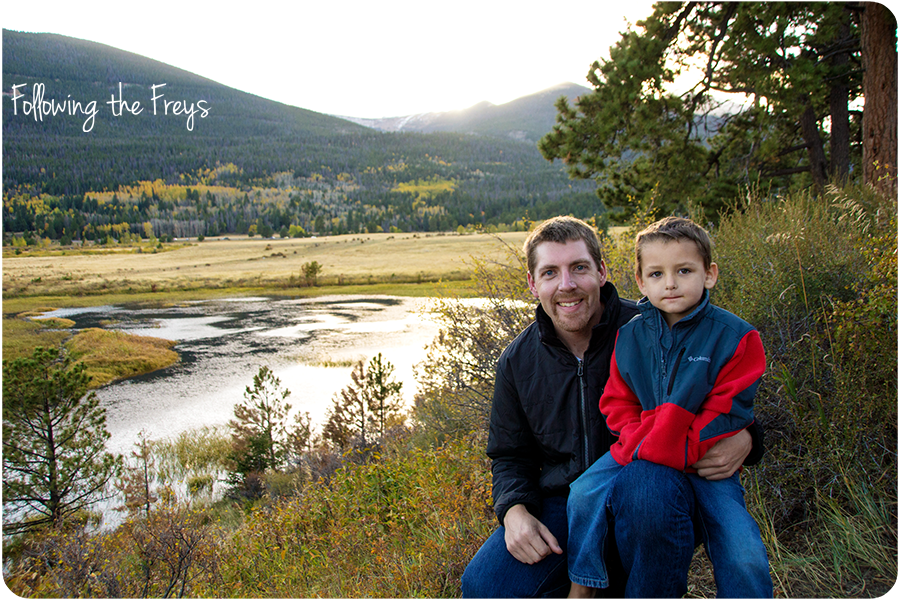 Back at a more hospitable altitude, we stopped at this meadow at sunset as the elk were starting to bugle.  Gorgeous!  (And the guys are pretty good lookin' too...)

Wednesday we flew from Colorado to Oregon.  We are now getting settled in for a two-month stay with Brian's parents. 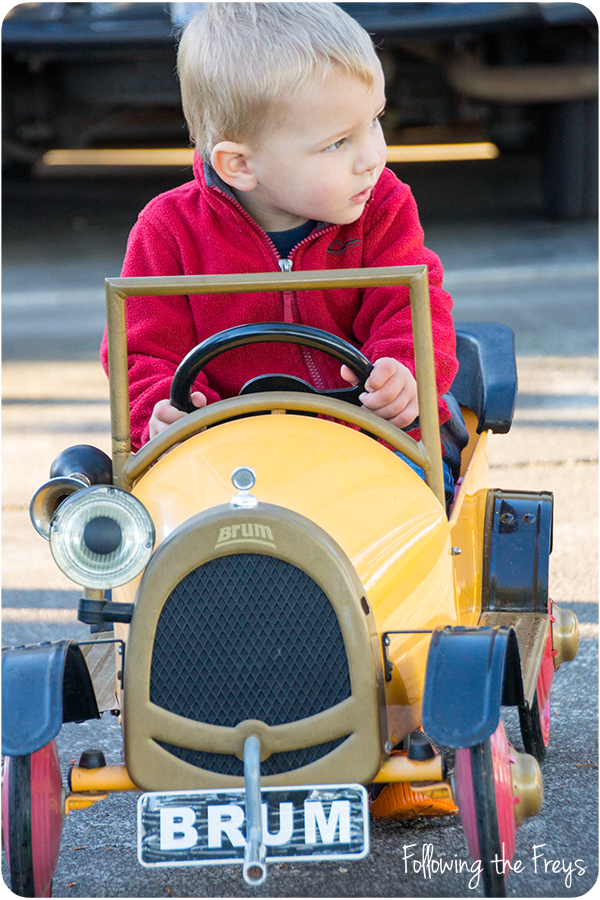 Grandma and Grandpa had some fun toys waiting for the boys. 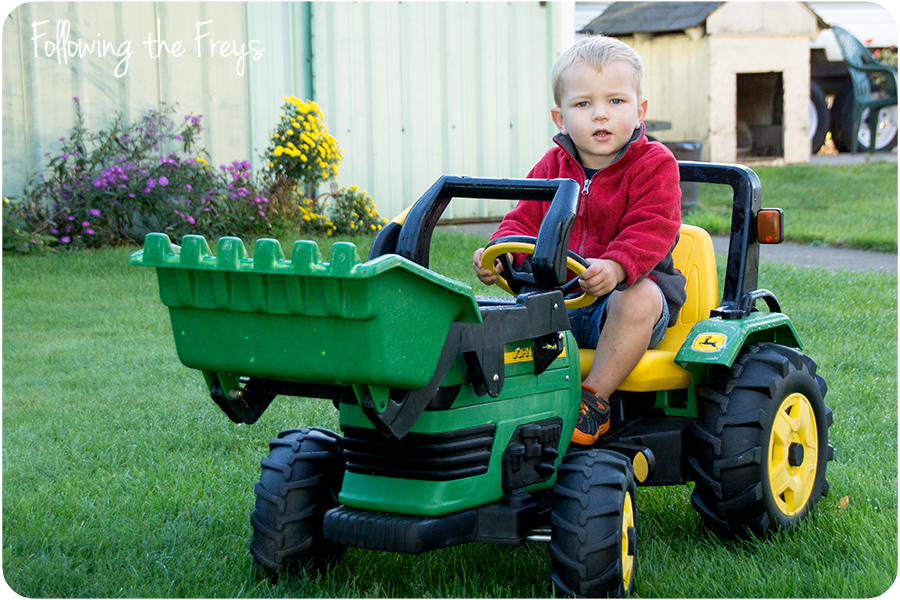 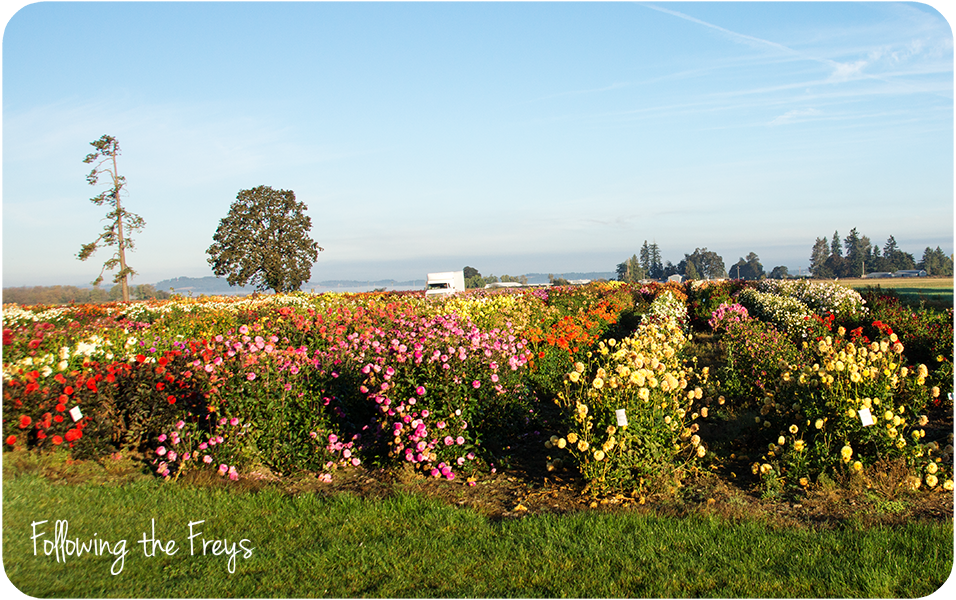 We missed out on berry season in Oregon this year, but at least we made it here while the dahlia field was still in bloom.  Talk about fall color! 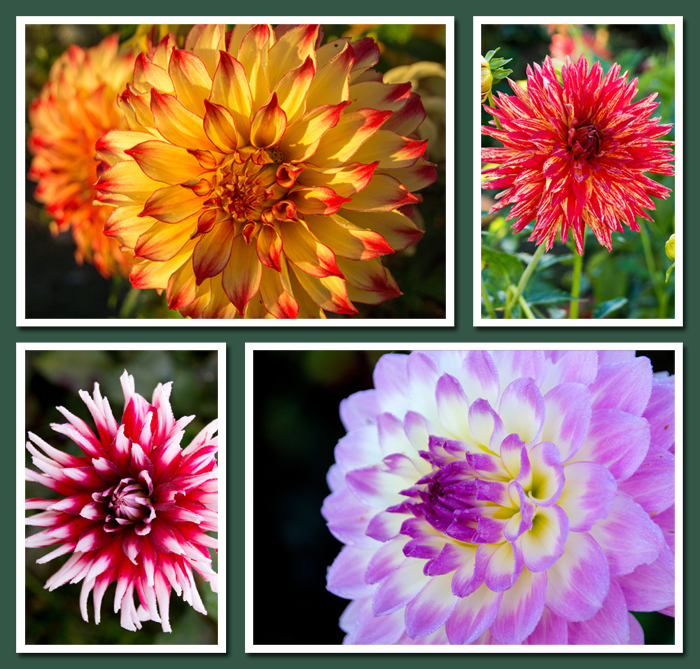 Only a short time left to stop by and walk through the field or pick yourself a bouquet.  Soon we'll be helping to cut these beauties down and dig up the tubers for winter.  Does this make you want to order some for your garden next year?  Visit www.freysdahlias.com 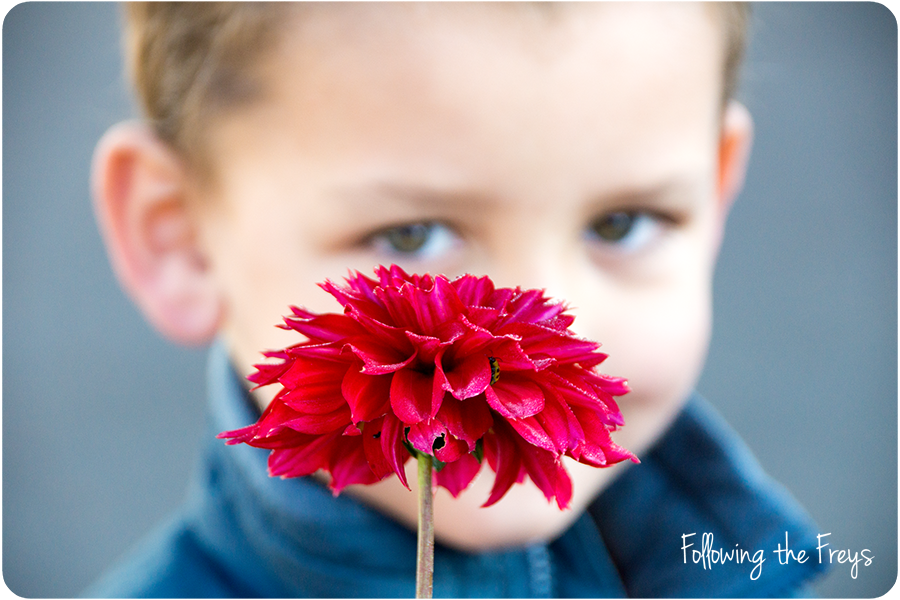 Grandma named a dahlia variety after Greg.  He is thrilled, and told me that he plans to go out to the field and pick one for me every day. :-)