Thanks for being patient!  As promised, here are some photos from Brian's week-long journey to Sudest island and back.  To start us off, I'm going to show you a little map, so that you know what we're talking about.  (If you received our last newsletter, you will have already seen this). 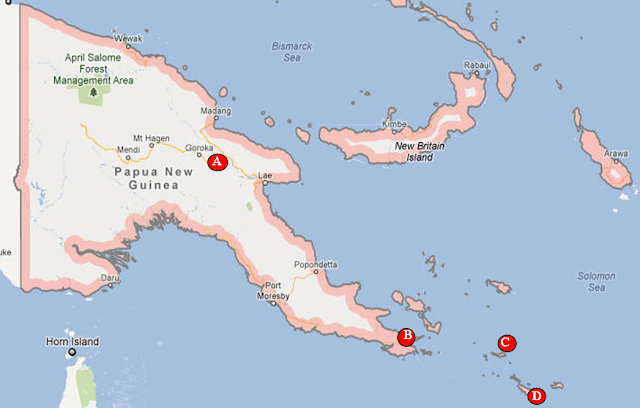 A on the map is Ukarumpa, where we live.  Sudest Island, home to the 2,000 or so speakers of the Sudest language, is D on the map.  Along the way, he traveled through Alotau (B) and Misima (C).

This is Alotau (B), way out on the tip of the mainland of Papua New Guinea.  Brian flew in one of SIL's Kodiaks from Ukarumpa to here on Thursday.  Brian was looking forward to seeing Alotau for the first time, as he had heard a lot about it. 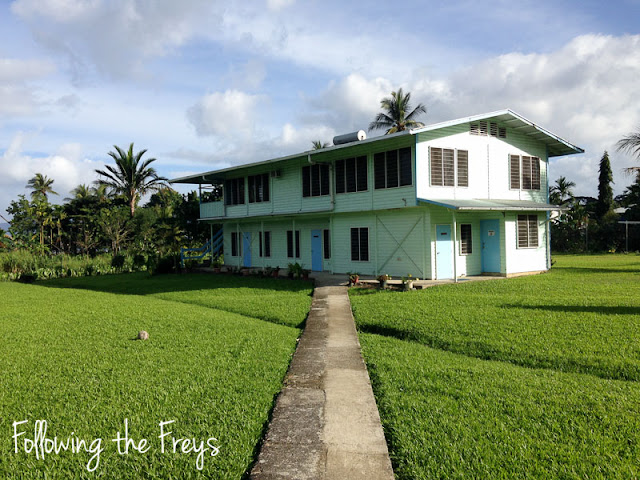 We have a regional center in Alotau, so that's where Brian spent the night. 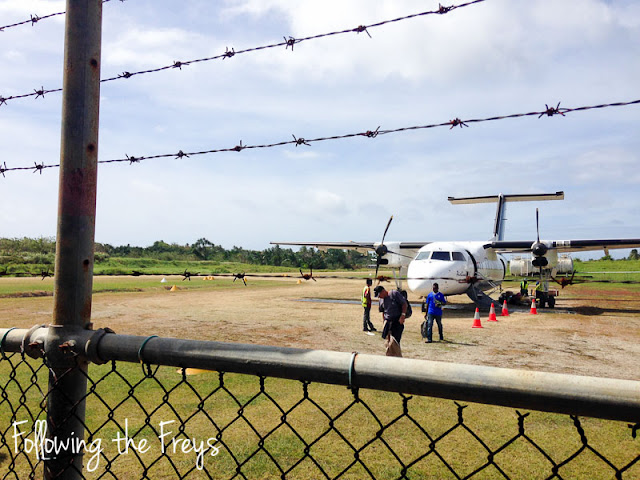 On Friday, he caught a commercial flight from Alotau to Misima Island (C on the map), which was the closest functioning airstrip to Sudest island. 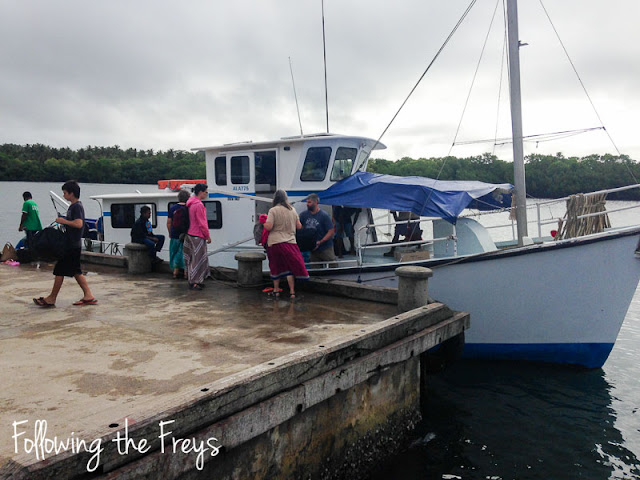 Friday afternoon it was time to board the Kwadima II, SIL's boat that operates in this part of the country, providing  reliable and safe transportation for translators working in the islands and coastal areas.  Take a good look at the boat now, because once they get going you'll find that Brian was too busy trying to keep his feet under him and the contents of his stomach in place to take any photos! 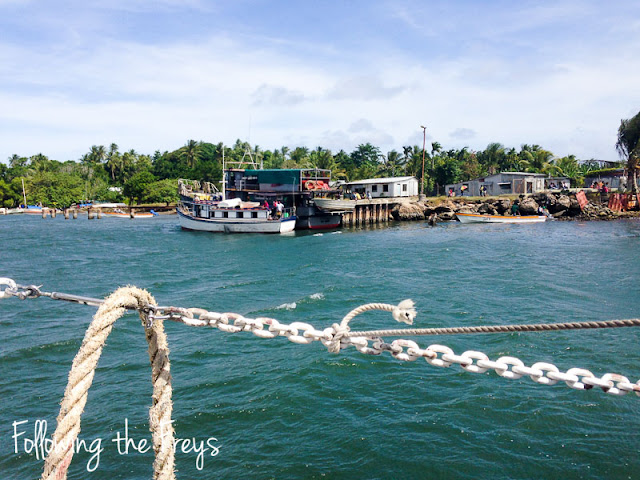 Looks lovely from on board, doesn't it?  Well, this is before they left the harbor.  You see, a tropical cyclone had been pummeling the Solomon Islands (which are just out of sight to the right on that map at the top) and that made for very choppy waters for the whole ten-hour boat ride from Misima to Sudest.

Brian tells me that there were whitecaps as soon as they left the harbor, and immediately the vomiting began.  This boat had around twenty expatriates along with a few Papua New Guinean guests and the boat's crew.  During that whole, long ride (they didn't reach Sudest until 11pm!), there were only four expats who did not get seasick.  Brian was among them.  I could share more details about the "sick buckets" that were passed around and filled over and over, but maybe you don't really want to know...

Brian and three other men (the valiant four with stomachs of steel), soon realized that the "best" place on the boat was to stand directly behind the cabin, tightly gripping the structure in order to keep their feet.  They got plenty wet, and Brian tells me that their skin was caked with salt by the time they reached their destination.

They had to anchor the Kwadima far off the shoreline at Sudest and take turns in a smaller dinghy to get to land.  Once back on dry ground, they took a cold shower, changed clothes, and went directly to bed!

In the morning, it was time to look around! 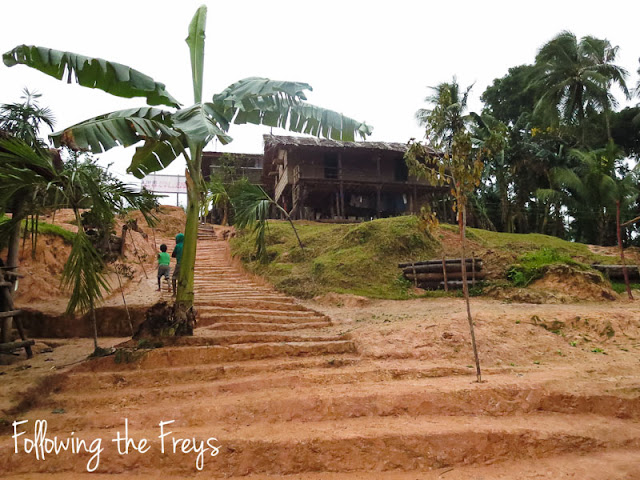 This house, right at the top of those clay stairs, is the one that Brian stayed in with a few other men. 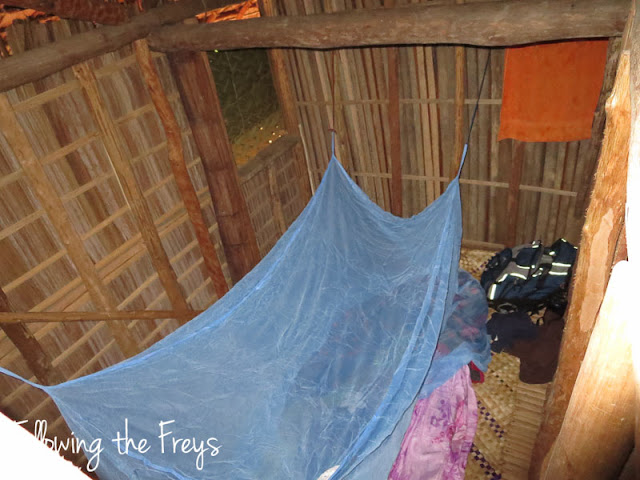 His room:  a mattress and mosquito net - what more do you need?  Actually, he had a blanket too, and was thankful because the sea breezes were chilly at night. 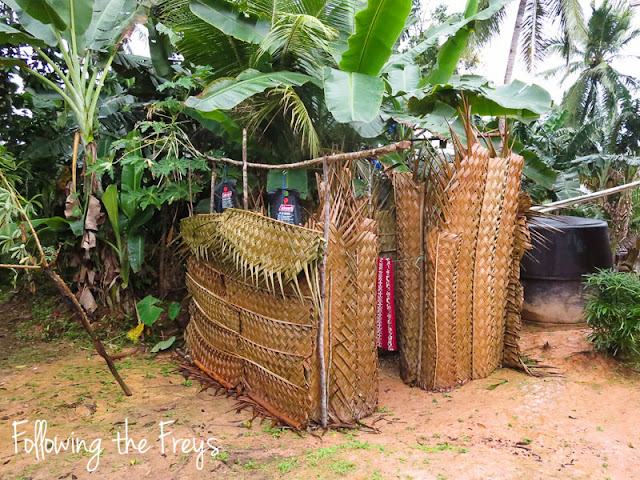 The four-stall shower that was set up especially for the visitors.  See the Coleman camp showers hanging in each stall?

A panoramic view of the village.  As you can see, the ground is all red clay.  They had a lot of rain while they were there (thanks again to that storm in the Solomons), and so this pretty much all turned into mud.... 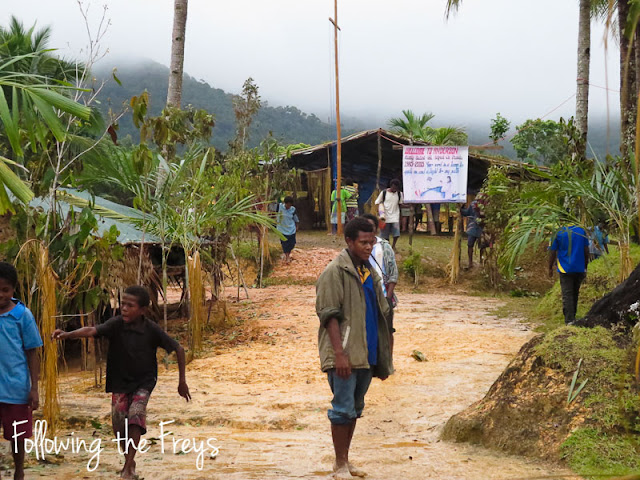 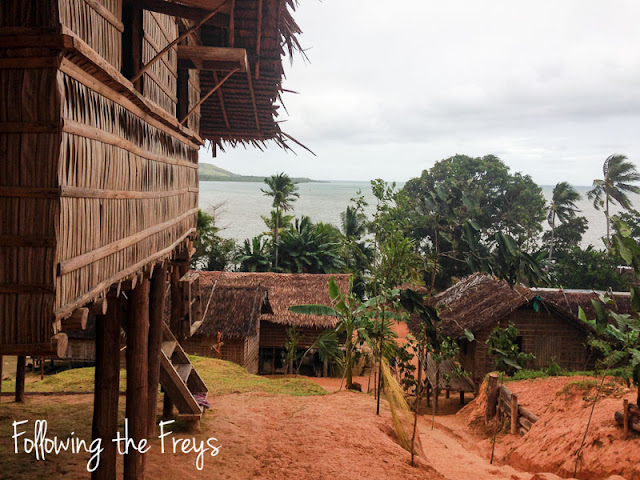 Pretty though, despite the weather. 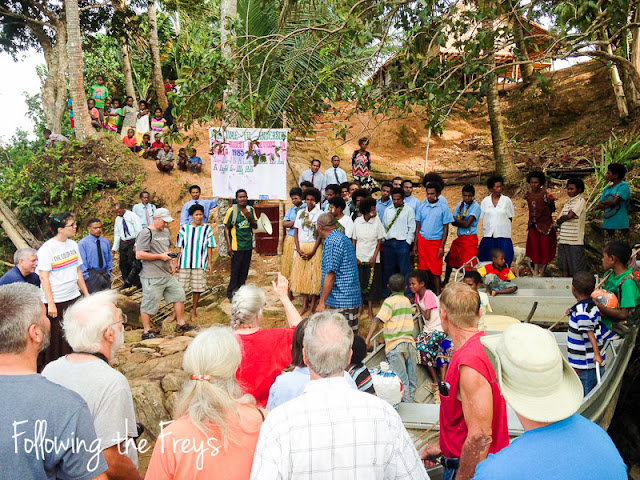 Saturday morning all of the guests gathered at the beach for a formal welcoming ceremony (kind of hard to do it in the middle of the night when your visitors are all tired and sick!) 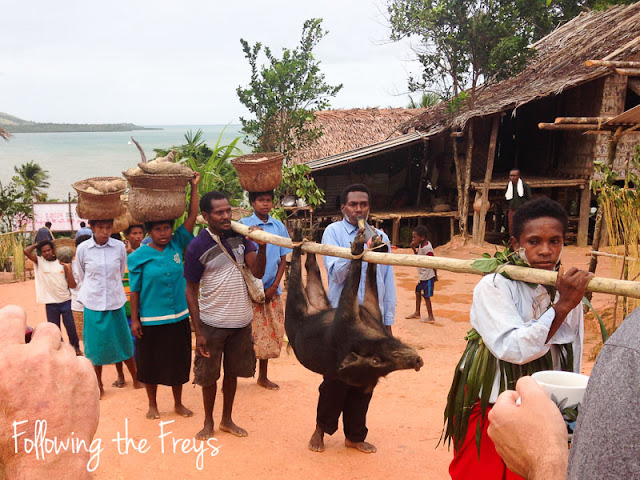 In preparation for the celebration, people kept arriving from all over the island, and they brought food and gifts with them.  It's really amazing how much food can be prepared at these sorts of gatherings. 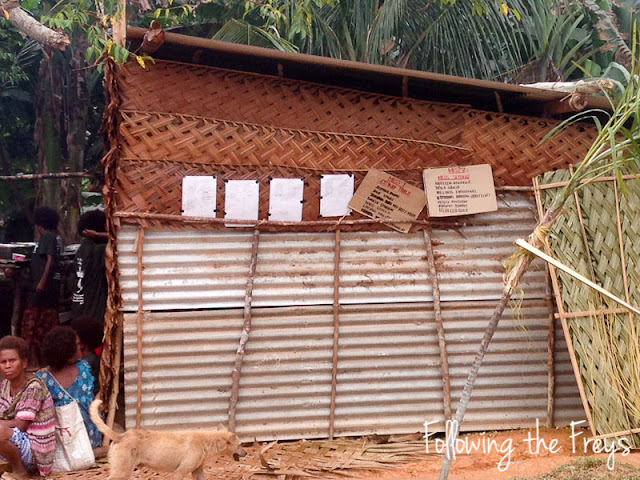 And they were organized too.  Here are a bunch of notices posted so that everyone knew who was responsible for what. 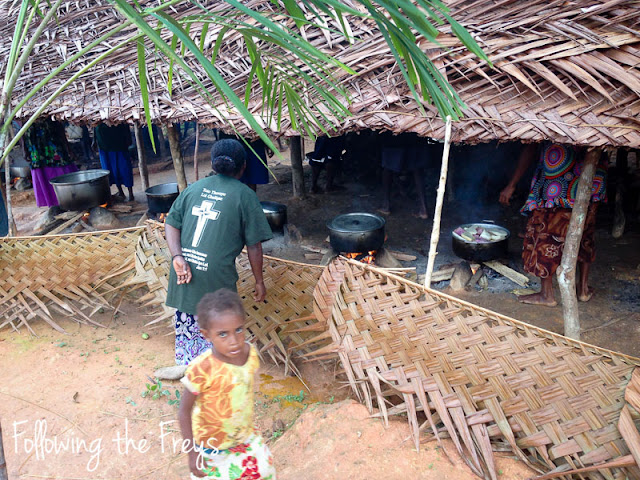 This is the haus kuk where a group of ladies worked hours upon hours preparing meals for all of the guests over the weekend. 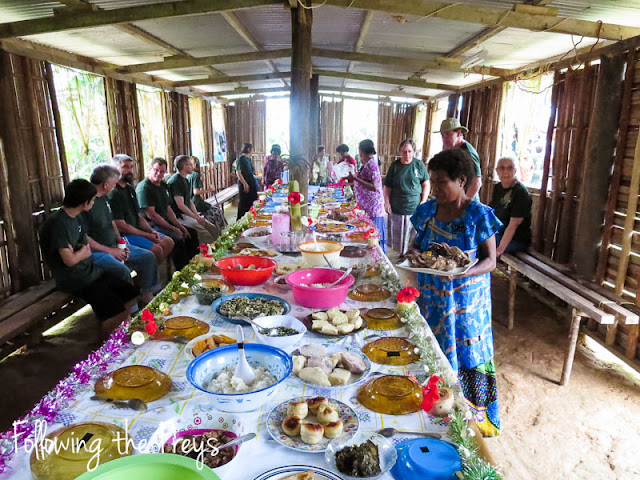 Meals were served in this long "mess hall."  As you can see, they served all sorts of things.  This is where Brian had his first taste of sea turtle, which was one of the animals butchered along with many pigs and chickens.

The dedication was slated for Sunday, and so Brian and the other guests had some time to kill on Saturday.  They went for a hike to the interior of the island to go swimming. 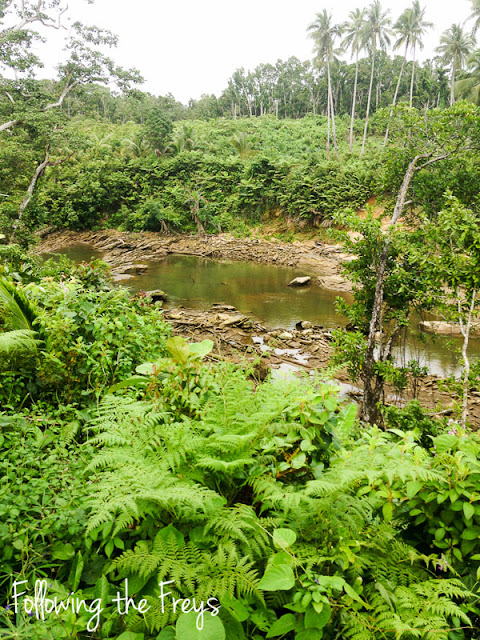 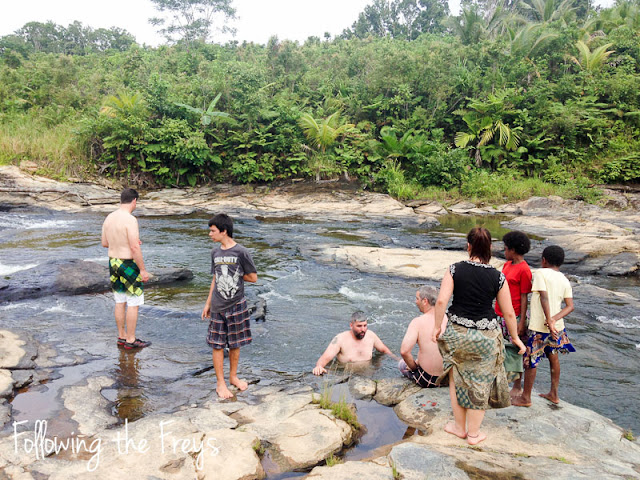 It was a bit chilly, so no one swam for long.

The actual dedication celebration was split between Sunday afternoon and Monday morning, as the community waited for a break in the weather that never really came. 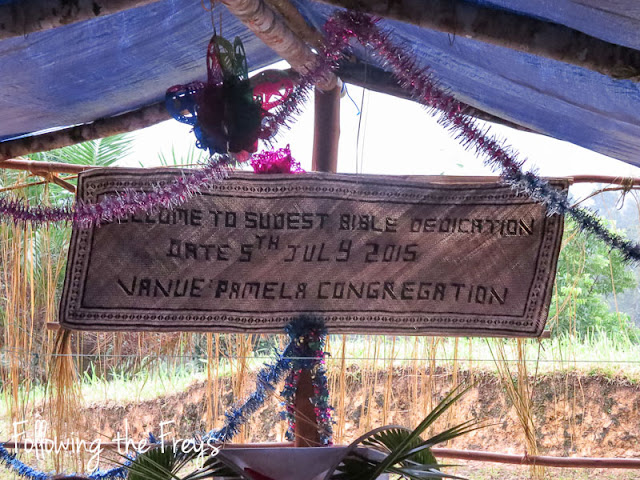 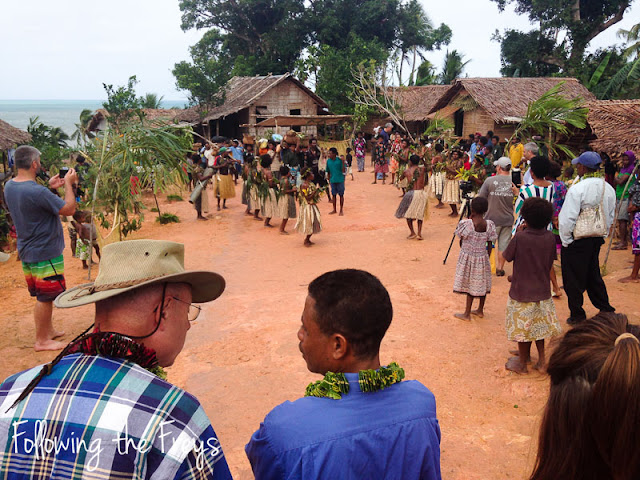 Traditional dancing, a common thread among celebrations throughout PNG. 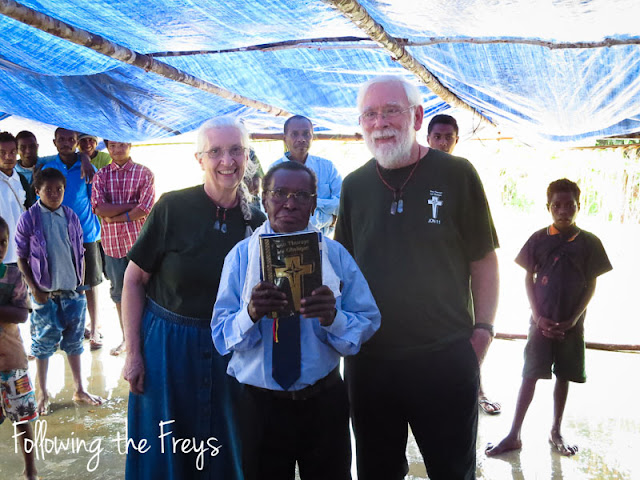 Mike and Thera Anderson, the translators who began working in Sudest in 1984.  What a joy to see the goal of a New Testament finally complete!

So that's the story of the Sudest Bible Dedication.  It's a shame that the stormy weather put a damper on the celebration, but the celebration is just a few days in the lifetime of this community.  The important thing is that Sudest is a strong and vital language (the little children Brian saw in the village didn't know any other language) and that the community is very excited about their New Testament and eager to use them. 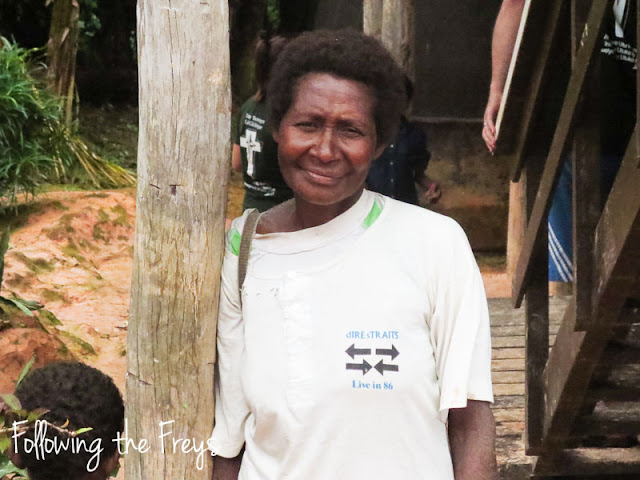 Brian's trip home was much more uneventful.  The weather was pleasant for the return trip, and Brian even managed to get some sleep by choosing to hang out in the cabin with the captain, who graciously offered to let Brian sleep on his bed!

Brian flew back from Misima to Ukarumpa on Wednesday.  They stopped en route in Port Moresby, where three of our Kodiaks happened to be at the same time, which makes for a nice photo, don't you think? 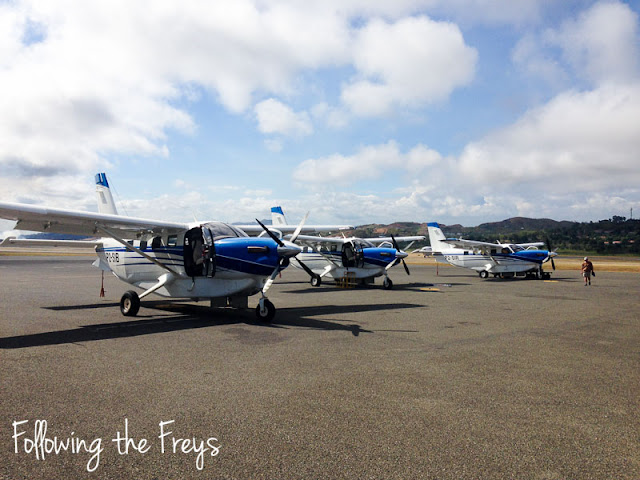 Well, we have him home with us for now.  He has another adventure in the works, but life will be back to normal for a few weeks at least.  Thanks for reading!