This week in the Frey household: 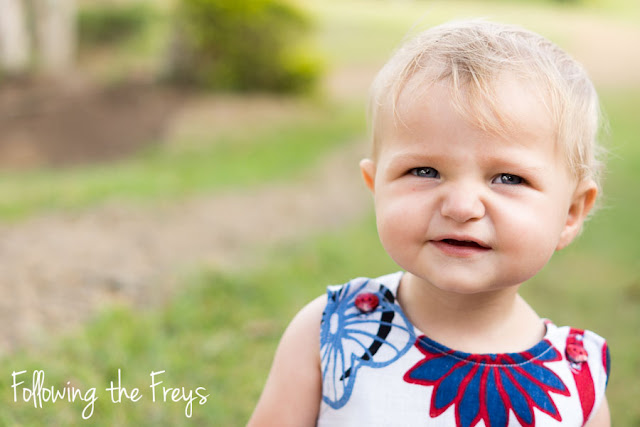 Kate has embraced her newfound mobility (she scoots on her bottom... very quickly now).  All of a sudden she doesn't seem so much like a baby anymore. 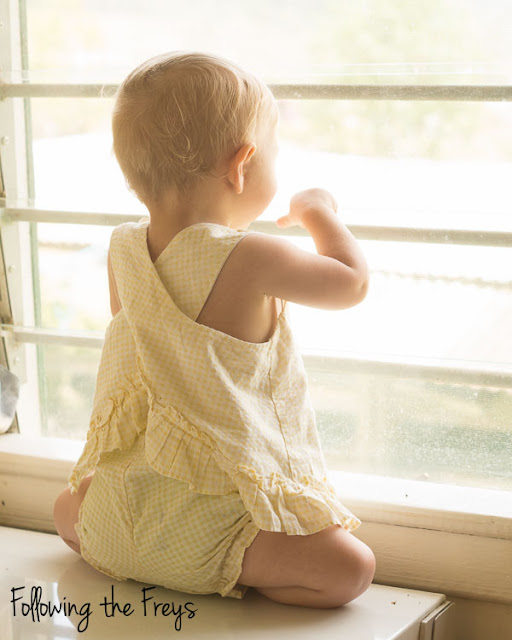 Sitting where she can look out the window is a favorite pastime. 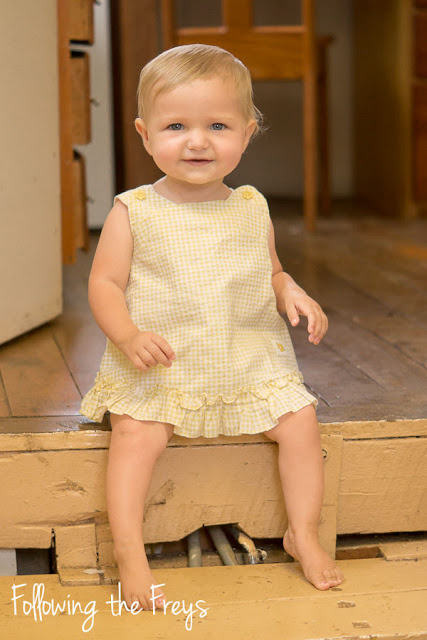 Look mom, I scooted over to the top of the back stairs faster than you thought possible!  Perhaps you should be more diligent in making sure this door is closed? 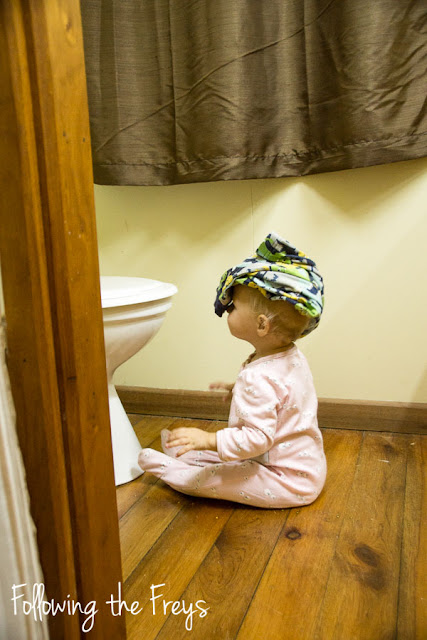 She has discovered the toilet - a very nice drum.  She was trying to be silly like her brothers, who were wearing their pajama pants on their heads.  She stole a pair and hightailed it to the bathroom as fast as she could, giggling. 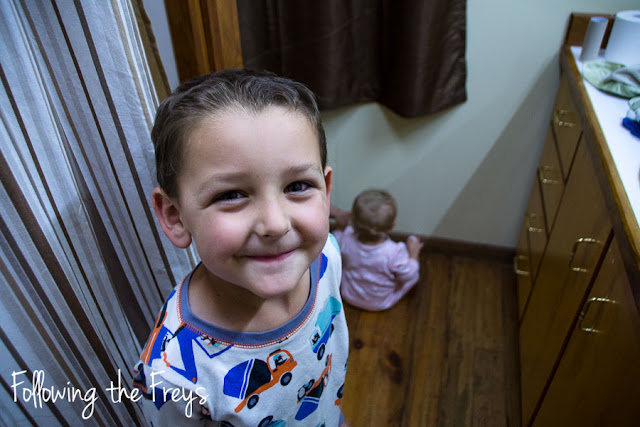 In Brian's world, the major excitement of the week was bringing phase one of a major electrical system upgrade online for the first time. 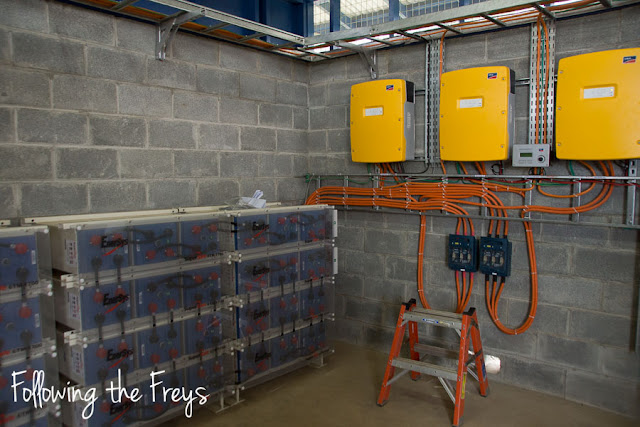 Don't ask me exactly how this all works, but the new battery house will integrate solar, generator and power from the national grid.  The batteries will store excess power produced by various solar systems around the center and will act as backup power when we have power outages (which is regularly!).  Previously we have experienced lots of power "blips" as the power switches from national power to generator and back and forth and back and forth.  With the batteries, we should have uninterrupted and clean power (less surges that can fry electronics).  This is a big upgrade! 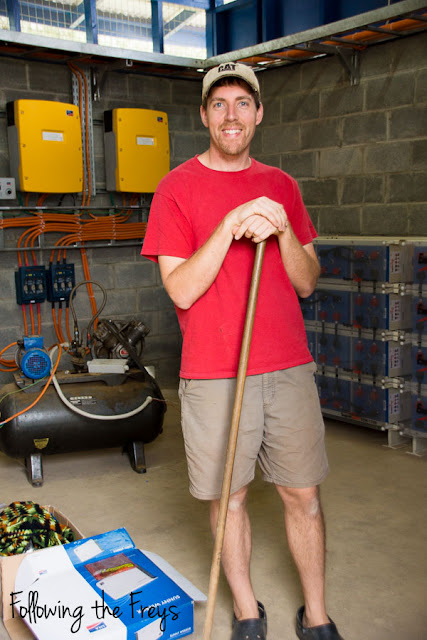 I tried to get a picture of him at work, but when I arrived he was just sweeping the floor while the other guys fiddled with the settings on the controls.  I guess they are keeping the "boss man" in his place! 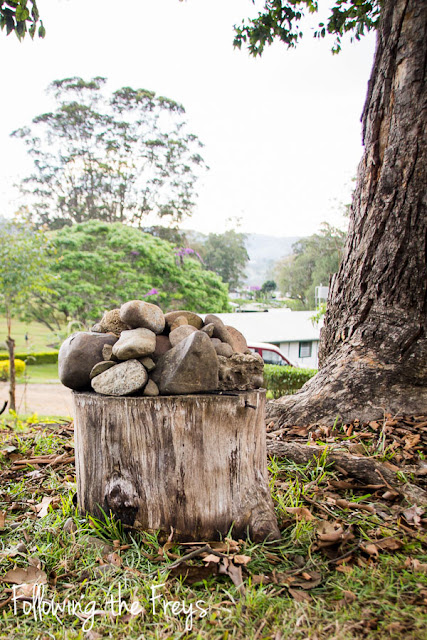 One night we had guests for dinner, and when they arrived Caleb was busy in the front yard constructing this.  When asked what he was doing he replied, in a very fierce voice, "I'm building an alter to my God, and he will send fire and burn up everything!!"  (Yeah... been reading about Elijah recently...) 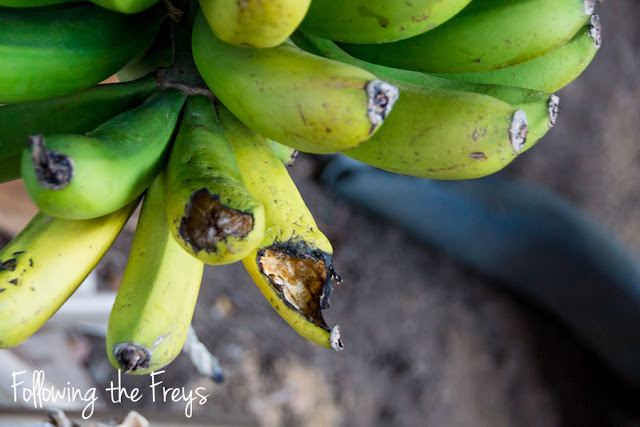 Evidence that the flying foxes have been enjoying the stalk of bananas that hang under our porch to ripen. 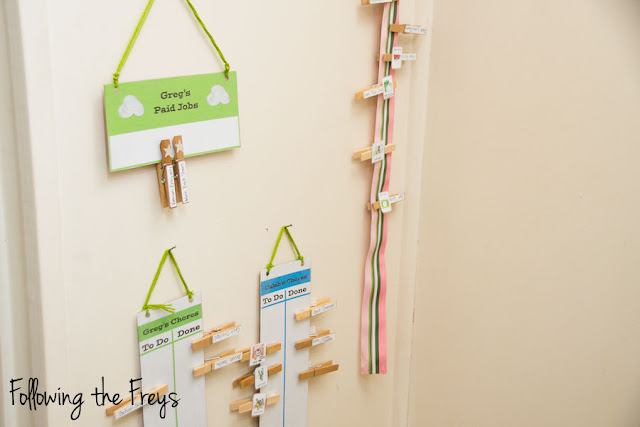 We're on day two of a new chore chart, and the novelty had not yet worn off.  The boys are begging for more chores.  I know this will not last.  Greg is really excited that we've decided he is old enough to have his own money.   If he completes his regular assigned chores, he has the option to pick some extra ones (the ones with stars), which we will collect for a week and then at the end of the week he'll get paid.  He's earning a whopping 10 toea per job (less than four cents).  This was decided in large part because we have a chronic shortage of coins here, and the 10 toea coins are the ones that I use least often.  Also, they are easy for a kindergartner to count.  And really, how much money does a 5-year-old really need? 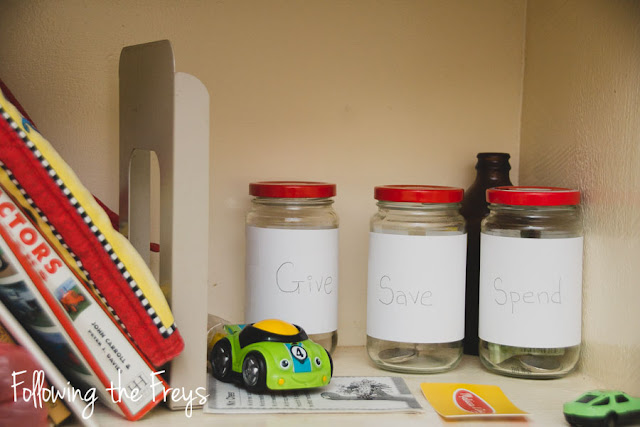 To go with this, he got his three new money jars.  I, the crafty mamma, was on Pinterest looking for some cute printable money jar labels (of which there were plenty), but Greg was rolling his eyes at me, so I decided to make them per his instructions - just the words, in pencil only, and no pictures.

(Yes, PNG friends, that is an empty SP bottle behind his jars.  Greg found it buried in the dirt in our back yard and thought it was just the kind of bottle a pirate/treasure hunter ought to have, so we cleaned it up and let him keep it.  Don't judge!  We're not letting our 5-year-old drink beer!)